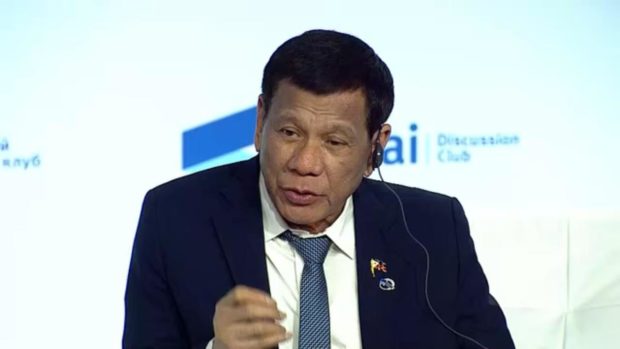 “And right now, even as I fly here and go back. There are about again two generals who are still playing with drugs,” Duterte said in the forum attended by other world leaders, Russian officials, policymakers, international experts, academicians and journalists.

He, however, did not identify the two generals or specify whether they are from the police or the military.

Duterte made the revelation as the Philippine National Police and its chief, Gen. Oscar Albayalde are embroiled in alleged illegal drug recycling and other related controversies.

“And I said, ‘Well, I told you do not destroy my country because it is being flooded with drugs,’” the President added.

Duterte said this as he underscored the urgency of ridding the government of corruption and illegal drugs.

“I’m not only fighting corruption from the inside of government. I was fighting…corruption and the trafficking of drugs even in my government. And that is why I had to do something very fast,” he added.

Duterte also told the forum that when he assumed the presidency in 2016, he found nine generals involved in drug trafficking.

“You know, during the time of two presidents ago, we were told by the United States itself that if we do not take care, if we do not watch out, our country will be swallowed by drugs,” he said.

“And we saw mayors, city mayors, and the chairman of the most basic unit of government, 50,000 into drugs. And when I took over, I found out about nine generals were involved in the trafficking of drugs,” he added.

In the same forum, the President defended his brutal war on drugs and slammed critics.

He stressed that his administration only “seek(s) to protect our republic [from] those who wish to tear it apart.” /gsg