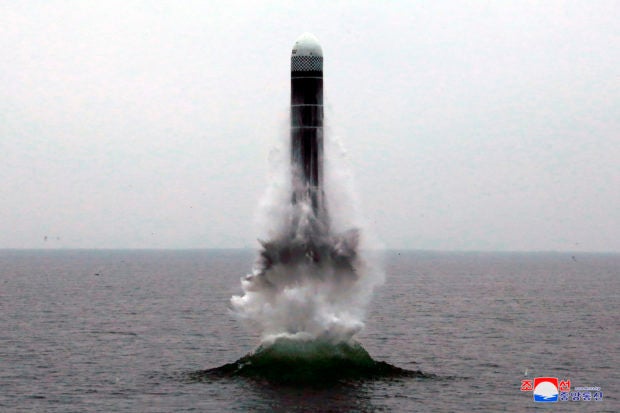 In this Wednesday, Oct. 2, 2019, photo provided Thursday, Oct. 3, 2019, by the North Korean government, an underwater-launched missile lifts off in the waters off North Korea’s eastern coastal town of Wonsan. North Korea fired a ballistic missile from the sea on Wednesday, South Korea’s military said, a suggestion that it may have tested an underwater-launched missile for the first time in three years ahead of a resumption of nuclear talks with the United States this weekend. Independent journalists were not given access to cover the event depicted in this image distributed by the North Korean government. The content of this image is as provided and cannot be independently verified. Korean language watermark on image as provided by source reads: “KCNA” which is the abbreviation for Korean Central News Agency. (Korean Central News Agency/Korea News Service via AP)

The test-firing Wednesday was North Korea’s first of a submarine-launched missile in three years and came ahead of a weekend resumption of nuclear diplomacy with the United States. Some experts say North Korea wants to show to the U.S. what would happen if diplomacy fails again.

The Korean Central News Agency said the test of the Pukguksong-3 missile in the waters off its east coast was successful and “ushered in a new phase in containing the outside forces’ threat to (North Korea) and further bolstering its military muscle for self-defense.”

It didn’t say which outside forces threaten its security. But North Korea has previously said it was forced to develop nuclear-armed missiles to cope with U.S. military threats.

North Korean and U.S. officials are to meet on Saturday to restart diplomacy on how to end the North Korean nuclear crisis. That diplomacy largely remains stalemated after the February breakdown of a second summit between President Donald Trump and North Korean leader Kim Jong Un in Vietnam.

North Korea has recently warned its dealings with the United States may end if it fails to come up with new proposals to salvage the nuclear diplomacy by December.

KCNA said the missile was launched in a vertical mode and that its test had no adverse impact on the security of neighboring countries. It said Kim sent “warm congratulations” to the national defense scientific research units involved in the test-firing.

The KCNA report didn’t elaborate on whether the missile was fired from a submarine, a barge or other underwater launch platform.

North Korea having an ability to fire a missile from a submarine is a threat to the United States and its allies because such launches are harder to detect early enough to respond. The use of solid fuel also increases a weapon’s mobility.

After Wednesday’s launch, the U.S. State Department called on North Korea “to refrain from provocations, abide by their obligations under U.N. Security Council resolutions, and remain engaged in substantive and sustained negotiations to do their part to ensure peace and stability on the Korean Peninsula and achieve denuclearization.”

South Korea’s military said the North Korean missile traveled about 450 kilometers (280 miles) at a maximum altitude of 910 kilometers (565 miles). Japan lodged an immediate protest, saying the missile landed inside its exclusive economic zone for the first time since November 2017.

If fired at a standard trajectory, the missile could have traveled 1,500-2,000 kilometers (930-1,240 miles), Kim Dong-yub, an analyst from Seoul’s Institute for Far Eastern Studies, wrote on Facebook. /gsg