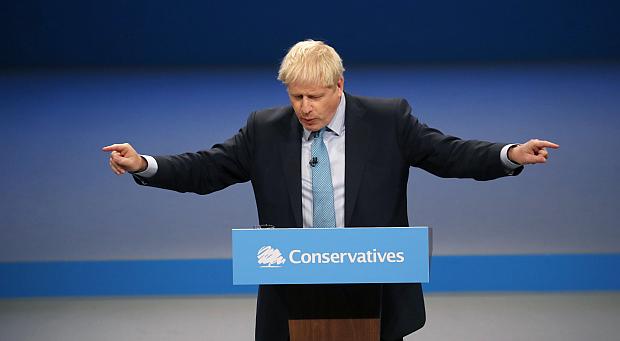 MANCHESTER, England — The U.K. will offer the European Union a proposed Brexit deal on Wednesday that represents a compromise for both sides, British Prime Minister Boris Johnson said as he urged the bloc to meet Britain halfway and allow for the country’s orderly departure after years of wrangling.

Johnson’s speech to Conservative Party members at their annual conference had been billed by his office as a take-it-or-leave-it “final offer” to the EU. Yet as delivered, it was more like a plea to the bloc, and to Britons, to end more than three years of acrimonious wrangling over the terms of the U.K.’s exit from the EU.

“Let’s get Brexit done,” was the repeated refrain to delegates at the conference in Manchester, northwest England.

British voters in 2016 narrowly chose to leave the EU but the country remains deeply divided over how to do it. In his speech, Johnson said people who voted for Brexit “are beginning to feel that they are being taken for fools.”

“They are beginning to suspect that there are forces in this country that simply don’t want Brexit delivered at all,” he said in the nationally televised speech. “And if they turn out to be right in that suspicion, then I believe there will be grave consequences for trust in our democracy.”

With Britain’s delayed departure from the bloc due to take place on Oct. 31, Johnson said the government would send “constructive and reasonable proposals” to the EU later Wednesday.

He said the plan was “a compromise by the U.K. And I hope very much that our friends understand that and compromise in their turn.”

But the plans are likely to face deep skepticism from EU leaders, who doubt the U.K. has a workable proposal to avoid checks on goods or people crossing the border between EU member Ireland and the U.K.’s Northern Ireland after Brexit — the key sticking point to a deal.

Johnson insisted that “we will under no circumstances have checks at or near the border in Northern Ireland.”

A Brexit agreement between the EU and Johnson’s predecessor, Theresa May, was rejected three times by the U.K. Parliament, largely because of opposition to the “backstop,” an insurance policy designed to ensure there is no return to customs posts or other infrastructure on the Irish border.

An open border underpins both the local economy and Northern Ireland’s peace process. But Johnson and other British Brexit supporters oppose the backstop because it would keep the U.K. tightly bound to EU trade rules in order to avoid customs checks — limiting the country’s ability to strike new trade deals around the world.

Johnson said the government’s proposal involved maintaining “the existing regulatory arrangements for farmers and businesses on both sides of the border.” That could keep Northern Ireland in a regulatory zone with the EU for food, agricultural and industrial products, removing the need for checks, but the EU will carefully study the details.

Britain has previously suggested such an arrangement could have a time limit — something the EU has rejected.

The EU said it would give the British proposal serious legal vetting before saying whether it is worthy of being a basis for future talks on the U.K.’s departure.

The European Commission said in a statement that “once received, we will examine (the U.K. text) objectively and in light of well-known criteria,” which includes whether it prevents a hard border on the island of Ireland, preserves cooperation between the Republic of Ireland and Northern Ireland and respects the EU rules on trade across borders.

European Commission President Jean-Claude Juncker is to speak with Johnson in the afternoon and technical talks among both sides are planned.
Johnson has vowed to leave on Oct. 31 with or without a Brexit deal.

He repeated his contention that the U.K. can handle any bumps that come from tumbling out of the bloc without a deal, which would mean the instant imposition of customs checks and other barriers between Britain and the EU, its biggest trading partner.

A no-deal Brexit is “not an outcome we want … (but) it is an outcome for which we are ready,” he said in his speech.

But the U.K. government and businesses both say the disruptions would be substantial, with the flow of goods coming into Britain through the major Channel port of Dover cut in half.

Many lawmakers want to prevent a no-deal exit, and have passed a law that compels the government to seek a delay to Brexit if it can’t get an agreement with the EU by Oct. 19. Johnson says he won’t do that — although he also insists he will obey the law. He has not explained how doing both those things will be possible.

Johnson, who has had a tumultuous 70 days in office, delivered a speech that was almost Boris-by numbers, peppered with puns, grand claims about Britain’s greatness and jokes at the expense of his opponents — chiefly left-wing Labour Party leader Jeremy Corbyn, whom he dubbed a “communist cosmonaut.”

It was also, pointedly, a pre-election speech, with a grab-bag of promises: more money for hospitals and police, unspecified tax cuts, greener buses and faster internet access.

The brash Brexit champion is popular with many Conservative members, who welcome his energy and optimism after three years of Brexit gridlock under May. Some, though, have qualms about his personal conduct and his divisive tactics, which include using words like “surrender” and “betrayal” about opponents of Brexit.

He has been dogged by allegations that he handed out perks to a female friend’s business while he was mayor of London and groped the thigh of a female journalist at a lunch two decades ago. Johnson denies impropriety in both cases.

The claims have not dented his popularity among many Conservatives.

“We don’t need Saint Boris, thank you,” said Jean Chesworth, a delegate from Newcastle-under-Lyme in central England. “We’re none of us saints. We can all look at the skeletons in our cupboards.”

She said the speech was “a synthesis of all Boris is … dynamic, successful outward-looking, optimistic, positive and achieving. That’s the person he is.”