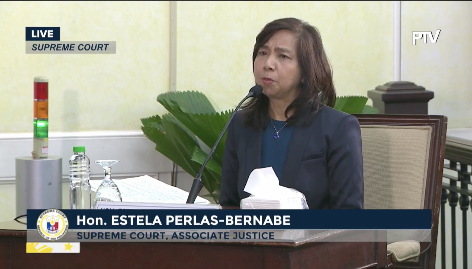 MANILA, Philippines — The Chief Justice “is not a position of superiority but an opportunity to lead the judiciary.”

This was the pronouncement of Supreme Court Associate Justice Estela Perlas-Bernabe as she faced a public interview by the Judicial and Bar Council (JBC) on Wednesday. Bernabe is the fourth candidate for the top judiciary post, which will soon become vacant with the retirement of Supreme Court Chief Justice Lucas Bersamin, who would turn 70 years old on October 18.

“Whoever is appointed, I would like to request he hear his constituents, the problems that they have, and remember that collective effort is a key to success,” she pointed out.

She further noted that whoever becomes the next chief justice, he or she should remember that loyalty must be to the people and Constitution.

Bernabe also admitted that she has a son that works in Malacañang but assured that it does not in any way affect her work. She concurred in the decision upholding the legality of the declaration of martial law in Mindanao as well as its extensions. But she dissented on the decision that affirmed the arrest of Senator Leila De Lima and also joined the minority in the quo warranto case against former Chief Justice Maria Lourdes Sereno.

“My son and I are governed by the separation of powers doctrine,” Bernabe said when asked if she feels “conflicted” about their career circumstances.

If appointed Chief Justice, she said her reforms will be divided in accordance with her vision.

“First on the decongestion of dockets, I will prioritize the implementing rules on the Judge-At-Large Act as well the Family Courts Act and will seek a codification of all rules of procedure plus I will also urge the PHILJA (Philippine Judicial Academy) to create a template for courts not only for order in special commercial courts and other specialized courts but also decisions and resolutions of lower court judges,” she said.

Moreover, Bernabe said she will activate the Judicial Integrity Court “so that complaints against judges, other court personnel as well as including court administrators can be investigated by them.”

Bernabe is currently the fourth most senior justice at the Supreme Court. /kga