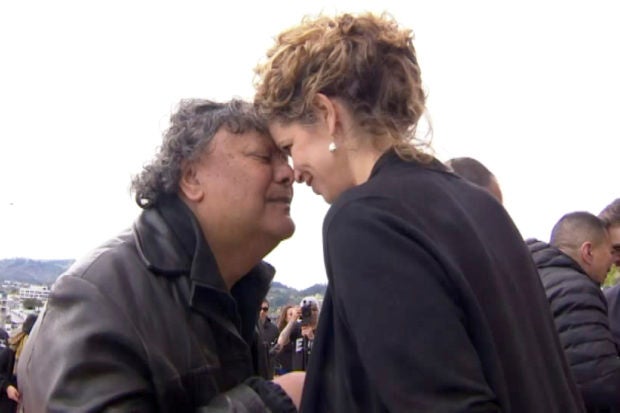 In this image made from video, British High Commissioner Laura Clarke receives a hongi from a local when she visited the town of Gisborne, New Zealand, Wednesday, Oct. 2, 2019. Clarke expressed “regret” that British explorers killed some of the first indigenous Maori they met 250 years ago, but stopped short of issuing a full apology. Clarke met with Maori tribal leaders in the town as New Zealand marked the anniversary of Captain James Cook and the crew of his ship Endeavour arriving in 1769. (TVNZ via AP)

WELLINGTON, New Zealand — The British government on Wednesday expressed “regret” that British explorers killed some of the first indigenous Maori they met 250 years ago, but stopped short of issuing a full apology.

British High Commissioner Laura Clarke met with Maori tribal leaders in the town of Gisborne as New Zealand marked the anniversary of Captain James Cook and the crew of his ship Endeavour arriving in 1769.

Clarke’s words held historic significance but fell short of the full apology that some had sought from the British royal family.

Soon after Cook and his crew arrived, the sailors feared they were under attack after encountering Maori armed with weapons. But many scholars now believe Maori were likely only issuing a ceremonial challenge.

The sailors shot and killed an important leader, Te Maro, and over the following days killed eight more Maori before a Tahitian priest managed to mediate between the sides.

The British High Commission said the exact wording of Clarke’s speech to Maori leaders would remain private, but that she would acknowledge the pain of those first encounters and extend her sympathy to the descendants of those killed.

Britain has also been returning some historic artifacts taken by Cook’s crew, including canoe paddles.

In a Facebook video, the Maori “iwi” or tribe Rongowhakaata described that first encounter in blunt terms: “After only being here for two hours, Cook and his crew had trespassed, terrorized, killed, and stolen from us,” a narrator said.

Maori are involved in a decades-long legal process seeking redress for historic wrongs under New Zealand’s founding document, the Treaty of Waitangi. That 1840 document was signed on the British side by emissaries of Queen Victoria. Dozens of tribes have made settlements worth billions of dollars under the treaty’s provisions.

New Zealand’s Race Relations Commissioner and former Gisborne Mayor Meng Foon said Clarke’s words were another part of the reconciliation and relationship-building process. However, he said that as Gisborne mayor he had invited the British royal family to come to Wednesday’s event but received no response.

“It’s not the end of the story,” he said of Clarke’s speech. “I believe future generations will demand an apology.” /kga