Peralta on being next CJ: ‘There is hope for an individual like me’ 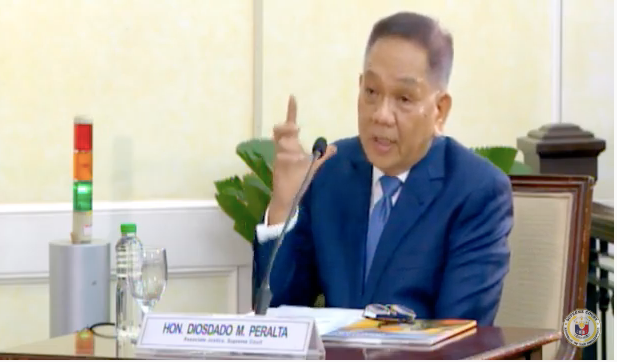 MANILA, Philippines — “There is hope for an individual like me,” Associate Justice Diosdado Peralta said as he faced members of the seven-man Judicial and Bar Council (JBC) on Wednesday.

Peralta is the first of the four candidates for the Chief Justice post to be interviewed by the JBC. Being the third most senior justice of the high court, he was automatically nominated for the position upon the compulsory retirement of Chief Justice Lucas Bersamin on Oct. 18.

He said his journey to the Supreme Court was not a walk in the park. Every step of the way, even recently as one of the candidates for chief justice, he said he has been receiving criticisms that he is not a Bar topnotcher and not an honor student.

“I worked very hard all these years,” Peralta said in tears.

Even if he was not a topnotcher or an honor student, he said, “I think I was able to compensate with the work that I had as a public prosecutor, as a judge, as an associate justice of the Sandiganbayan, as a presiding justice, associate justice of the Supreme Court, as a lecturer and chairman of several committees, I think they are more than enough to compensate with what they say that I do not deserve [to become chief justice],” Peralta said in tears.

“I hope you have to take those into consideration that there is hope for an individual like me. Sorry, medyo emotional (I’m a little emotional),” Peralta said.

The JBC members asked Peralta what he thought of the impression that he is arrogant.

He said he is “sobrang bait” (very kind) to his colleagues and staff that when he goes abroad, he makes sure that each one has a gift.

Peralta said being “arrogant” is a misinterpretation of his being passionate with his work.

“Friendship ends when it comes to work,” he said.

“I am not arrogant. Masama pakinggan (My ears are burning)…Thank you for bringing that up because I had the opportunity to explain who I really am,” Peralta said. /je