BOSTON – A federal judge Tuesday cleared Harvard University of discriminating against Asian American applicants in a ruling that was seen as a major victory for supporters of affirmative action in college admissions across the U.S. 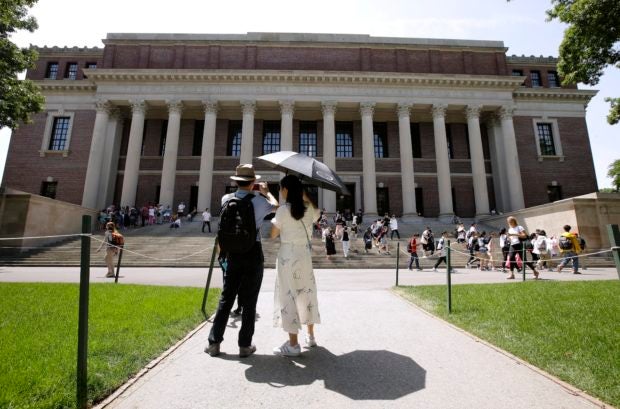 FILE – In this July 16, 2019, file photo, people stop to record images of Widener Library on the campus of Harvard University in Cambridge, Mass. U.S. District Judge Allison D. Burroughs ruled, Tuesday, Oct. 1, 2019, that Harvard does not discriminate against Asian Americans in its admissions process. The judge issued the ruling in a 2014 lawsuit that alleged Harvard holds Asian American applicants to a higher standard than students of other races. Burroughs said Harvard’s admissions process is not perfect but passes constitutional muster. (AP Photo/Steven Senne, File)

In a closely watched lawsuit that had raised fears about the future of affirmative action, a group called Students for Fair Admissions accused the Ivy League college of deliberately — and illegally — holding down the number of Asian Americans accepted in order to preserve a certain racial balance on campus.

U.S. District Judge Allison D. Burroughs, however, ruled  that Harvard’s admissions process is “not perfect” but passes constitutional muster. She said there is “no evidence of any racial animus whatsoever” and no evidence that any admission decision was “negatively affected by Asian American identity.”

“Race conscious admissions will always penalize to some extent the groups that are not being advantaged by the process,” Burroughs wrote, “but this is justified by the compelling interest in diversity and all the benefits that flow from a diverse college population.”

Her ruling, which came after a three-week trial a year ago, brings temporary relief to other universities that consider race as a way to ensure campus diversity. But it also sets the stage for a prolonged battle that some experts predict will go all the way to the U.S. Supreme Court.

Harvard President Lawrence S. Bacow welcomed the ruling, saying that the consideration of race and many other factors “helps us achieve our goal of creating a diverse student body that enriches the education of every student.”

“Today we reaffirm the importance of diversity — and everything it represents to the world,” he said.

Students for Fair Admissions said it will appeal.

“Students for Fair Admissions is disappointed that the court has upheld Harvard’s discriminatory admissions policies,” Edward Blum, the group’s president, said in a statement. “We believe that the documents, emails, data analysis and depositions SFFA presented at trial compellingly revealed Harvard’s systematic discrimination against Asian-American applicants.”

The American Council on Education, which represents dozens of college and university presidents, said the decision is gratifying against a backdrop of “continuing attacks on what remains the settled law of the land in this area.”

“We applaud this ruling and are confident that the nation’s courts, including its highest court, will continue to uphold the vital principle that colleges and universities that choose to do so can consider race as one factor in reviewing applicants to achieve the goal of a talented, diverse incoming class,” Ted Mitchell, the group’s president, said in a statement.

In the case at Harvard, the plaintiffs argued that Asian Americans were held to a higher standard in admissions, amounting to an “Asian penalty,” while the school gave preference to black and Hispanic students with poorer grades.

A 2013 internal report at Harvard found that if the school weighed applicants on academics alone, 43% of the admitted class would be Asian American, while in reality it was 19%. Harvard said the report was only meant to be “exploratory” and was based on incomplete data.

Much of the lawsuit centered on a subjective “personal rating” that Harvard assigns to applicants. The suit argued that Asian Americans consistently receive lower personal ratings because of racial bias, leading many to be rejected.

The plaintiffs built their case around a statistical analysis of six years of Harvard admissions data. It found that Asian Americans had the lowest personal ratings and the lowest admission rates, while black and Hispanic students fared far better in both areas.

Harvard countered with its own analysis finding no evidence of bias. During the trial, the dean of admissions offered possible reasons to explain the low personal rating for Asian Americans, saying they may come with weaker letters of recommendation.

The judge sided with Harvard on every count of wrongdoing alleged in the lawsuit. She said differences in personal ratings are “relatively minor” and can be explained by a variety of factors. She said Harvard proved that its use of race is limited and that abandoning it would lead to a sharp decline in diversity.

But she also said the admissions process could be improved by providing “implicit bias” training to admissions officers and by maintaining clear guidelines on the use of race.

Like many elite colleges, Harvard acknowledges it considers race in admissions as a way to boost diversity but says it is only one of many factors in deciding which applicants to admit. Some states ban consideration of race in admissions.

The Supreme Court last examined affirmative action in 2016 and upheld the practice at the University of Texas.

That decision was written by Justice Anthony Kennedy, who has since retired. The two justices appointed by President Donald Trump, Neil Gorsuch and Brett Kavanaugh, are generally more conservative than Kennedy but do not have extensive records on affirmative action.

The trial offered a rare glimpse into Harvard’s secretive admissions process, including the ways it favors wealth and privilege. In a series of emails released in the case, Harvard officials openly discussed the fundraising prospects of applicants.

Harvard has called Students for Fair Admission a political group with no real interest in helping Asian Americans. Instead, its critics say, the organization’s real goal is to end affirmative action altogether. Blum is a legal strategist who has orchestrated lawsuits to ban it at other colleges.

The group says it has more than 20,000 members, including one Asian American who was unfairly rejected in 2014, but none have come forward publicly. During the trial, no students testified that they faced discrimination by Harvard.

The organization’s leaders also include Abigail Fisher, who sued the University of Texas in the case that went to the Supreme Court in 2016. Fisher said she was rejected because she is white. In a 4-3 decision, the court upheld the school’s use of race.

Supreme Court decisions have allowed colleges to consider race as long as it is “narrowly tailored” to promote diversity and is just one factor among many. Racial quotas have been ruled unconstitutional.

The Trump administration has fought affirmative action at several schools. In August 2018, the Justice Department issued a statement siding with Students for Fair Admissions, accusing Harvard of “outright racial balancing.” It is also investigating the use of race at Yale.

Students for Fair Admissions has also sued the University of North Carolina, Chapel Hill, over alleged discrimination against Asian American applicants. That suit, also filed in 2014, is still going on. /gsg