MANCHESTER, England – After months of Brexit stalemate, Britain is finally about to play its hand, setting out Prime Minister Boris Johnson’s “final offer” for a last-minute divorce deal with the European Union. 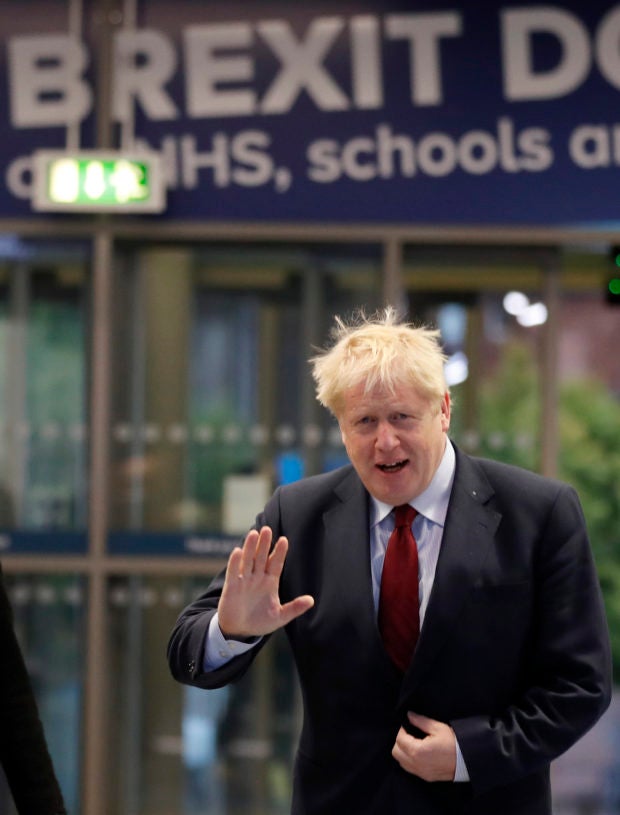 It’s a crucial moment for the embattled leader, who is faced with a skeptical EU, a divided U.K. and a supportive but worried Conservative Party. The party that chose Johnson as its leader in July is mostly — but not unanimously — rallying behind a politician whose drive and energy have been stained by allegations of improper behavior and divisive political tactics.

The government said Johnson would send the formal proposals to EU leaders in Brussels on Wednesday after he rallies his party with a conference speech in Manchester, northwest England.

Johnson’s office said the prime minister will call the proposals a “fair and reasonable compromise” but also a final offer, and say that if the EU does not agree to discuss it, Britain would refuse to negotiate further.

Advance extracts of Johnson’s speech released by his office did not reveal the contents of the proposed deal, leaving an impatient EU to wait a little longer.

Britain is due to leave the 28-nation bloc in just 30 days, and EU leaders are frustrated with the government’s failure thus far to set out detailed plans for maintaining an open border between the U.K.’s Northern Ireland and EU member Ireland — the key sticking point to a deal.

Johnson says Britain will leave the EU on the scheduled Oct. 31 date with or without a deal,  despite a law passed by Parliament that compels the government to seek a delay to Brexit if it can’t get a deal by Oct. 19.

A Brexit agreement between the EU and his predecessor, Theresa May, was rejected three times by the U.K. Parliament, largely because of opposition to the “backstop,” an insurance policy designed to ensure there is no return to customs posts or other infrastructure on the Irish border.

An open border underpins both the local economy and Northern Ireland’s peace process. But British Brexit supporters oppose the backstop because it would keep the U.K. tightly bound to EU trade rules in order to avoid customs checks — limiting the country’s ability to strike new trade deals around the world.

So far, the U.K. has floated the idea of a common area for livestock and agricultural products, plus largely untested “technological solutions” as a replacement for the backstop. The EU says that is inadequate. Ireland has already rejected an idea raised in preliminary U.K. proposals for customs posts five to 10 miles (eight to 16 kilometers) away from the border.

Johnson said Britain would not propose that idea, but added that it was a “reality” that some checks would be needed to create a “single customs territory” for the U.K.

He said checks could be conducted away from the border, possibly at either end of a shipment’s journey.

“That I don’t think will be onerous, it certainly wouldn’t involve infrastructure,” he told Sky News.

That still falls short of the seamless border that exists today. Irish Prime Minister Leo Varadkar said that under May, the U.K. government “promised no hard border or associated controls or checks and we expect the British government to honor that promise.”

“People here don’t want a customs border between north and south and no British government should seek to impose customs posts against the will of the people on the island of Ireland,” he said in the Irish parliament.

Johnson insists he wants to strike a deal with the EU to replace May’s rejected Brexit agreement. He also says the U.K. can handle any bumps that come from tumbling out of the bloc without a deal, which would mean the instant imposition of customs checks and other barriers between Britain and the EU, its biggest trading partner.

But the U.K. government and businesses say the disruptions would be substantial.

Trade Minister George Freeman told delegates at the Conservative conference that “if we leave without a deal, it’s going to be very bumpy.” He said the flow of trade across the Channel between the English port of Dover and the French port of Calais — the U.K.’s most important trade route — could be cut in half as customs and vehicle checks were introduced.

At the annual conference, Johnson is attempting to energize his party with all the bold policies he says the government will deliver once the U.K. manages to “Get Brexit Done” — from more money for police, roads and housing to a big hike in the minimum wage. Tuesday’s big theme, law and order, was slightly undermined when a Conservative lawmaker was ejected from the conference over an altercation that saw police swoop on a convention center lounge. /gsg