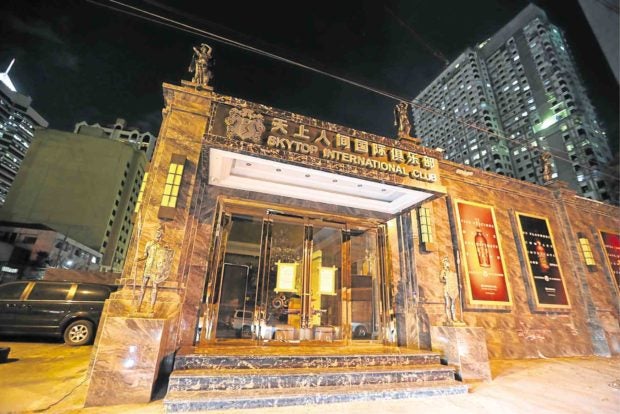 EXCLUSIVE The facade of Skytop International Club that passed itself off as a videoke bar on Yakal Street at Barangay San Antonio in Makati. The owner of the club was believed to be in China when it was raided on Monday night. —EDWIN BACASMAS

MANILA, Philippines — It was the third raid on a prostitution ring in Metro Manila in less than a month, suggesting a thriving business catering to a market made up of mainland Chinese men working in the Philippine offshore gaming operator (Pogo) sector.

Agents from the NBI Anti-Fraud Division also arrested 14 people, including eight Filipinos. The owner of the club was believed to be in China during the raid.

Skytop International Club on Yakal Street, Barangay San Antonio, reportedly passed itself off as a videoke bar, but the NBI received a tip that the place was a front for the prostitution den.

Through online registration on WeChat, an NBI undercover agent and a Chinese man were able to book a Filipino woman for P29,000.

One could not simply walk in without a prior booking. Instructions on how to register were displayed outside the building. The ads were in Chinese.

It took a long time before the undercover agents were able to enter the posh bar as the establishment had a strict guest policy.

The bar was exclusive to Chinese customers, agent John Marasigan told the Inquirer in an interview. Inside the building, the guests were all Chinese while some of the employees were Filipinos.

“We found out that prostitution was happening because the ‘mommy’ or pimp offered the services of entertainers—either Filipino or Chinese. We were told to pay the bar fine so we could have sexual [intercourse] with these women,” Marasigan said.

Once the bar fine was settled, the customer could take the woman out of the bar.

The rescued women were aged 19 to 27. Some of the foreign women were in the country on tourist visas.

The Filipino women said they were the “secondary option” of the customers. They added that they could take home around P10,000 from one booking.

Customers who paid the bar fine wore black bracelets with a Chinese character.

“The establishment caters to the sons of rich Chinese men, those who own online gaming sites,” he said.

There are 58 accredited Pogos in the country, with some 138,000 workers. Most of the Pogos employ Chinese workers and cater to mainland Chinese gamblers.

From the gate to the façade and even the flooring, the Skytop International Club building looked expensive, the agent added.

The den had been operating since October 2018.

Last month, dozens of Chinese women were rescued from two sex dens, one in Barangay San Antonio, Makati, and another on Roxas Boulevard in Parañaque City.

The women were found by policemen in four rooms of an apartment building in Barangay San Antonio.

The suspects and the victims were in the country on tourist visas, and already had departure tickets for use before their visas expired.

Foreigners, particularly Chinese men working in nearby offices of Pogos, were the patrons of the prostitution business, according to a police official.

On Sept. 18, police rescued 51 Chinese women from another prostitution den in a yet-to-open apartment building in Parañaque.

The sex den was advertised as “Manila Wellness Spa,” on the third floor of Diamond Bay Towers on Roxas Boulevard, Barangay Baclaran.

Arrested were 13 Chinese (nine men and four women), the alleged maintainers of the place, and 18 male Chinese patrons.