Drug recycling: Albayalde has a lot to explain – Magalong 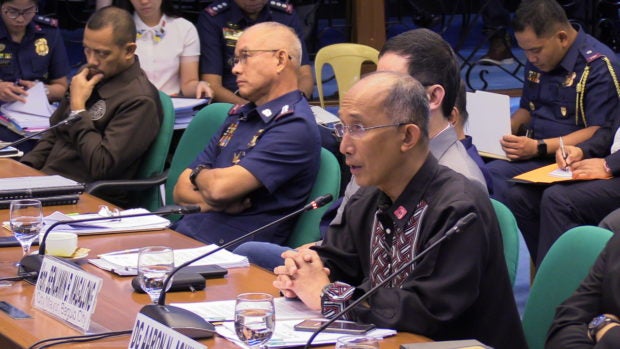 MANILA, Philippines — Philippine National Police chief Gen. Oscar Albayalde has a lot of explaining to do about an irregular antidrug operation carried out by his subordinates when he was still the Pampanga police director in 2013, Baguio City Mayor Benjamin Magalong insisted on Tuesday.

Speaking to reporters after a Senate hearing on the sale of seized drugs by corrupt policemen, Magalong rejected Albayalde’s insinuation that he had ill motives in linking him to the questionable operation led by the then intelligence chief of the Pampanga police, Supt. Rodney Baloyo.

Magalong said he just shared his knowledge of the racket after he was invited by the Senate justice and human rights committee, headed by Sen. Richard Gordon.

“I have nothing against him. You should understand that I did not volunteer to appear [in the hearing],” Magalong said.

Magalong also maintained that Philippine Drug Enforcement Agency (PDEA) chief Aaron Aquino had “repeatedly” told him about Albayalde’s request for him not to act on the dismissal order against Baloyo and 12 other police officers who took part in the operation.

Magalong, who looked into the incident as the then chief of the police Criminal Investigation and Detection Group (CIDG), said Aquino was unequivocal about the PNP chief’s intervention when they met with President Duterte in the Manila Hotel recently.

But during Tuesday’s hearing, Aquino said he felt no pressure from Albayalde’s 2016 phone call about the case of the 13 policemen who were accused of pilfering 162 kilograms of “shabu” (crystal meth) from the 2013 operation and freeing a drug suspect for P50 million.

He said Albayalde only wanted to know the status of the case and asked that it be reviewed.

Aquino said he could not have implemented the initial dismissal order against the 13 policemen anyway because they had brought a motion for reconsideration.

Asked if he believed Albayalde benefited from the drug operation, Magalong said: “You ask him. He knows what really happened.”

“I’m morally convinced that he knows what really transpired,” he added. “I am not lying.”

Told that Aquino had denied his claim that Albayalde tried to save Baloyo and the other officers, Magalong said: “You should also understand him. We have different personalities. He’s under a lot of pressure like me.”

He added: “He’s just conflicted right now. He must be feeling extreme stress. But when his mind was still very clear, he told me about it several times. He spoke about it spontaneously.

“He even mentioned that to the President when he was not under pressure unlike now. I noticed that he looked pressured [during the proceedings].”

Recalling the investigation carried out by his office, Magalong said then PNP chief Alan Purisima directed him to look into reports that Albayalde also had acquired a sport utility vehicle (SUV) shortly after Baloyo and his men led the operation.

Asked by Gordon for his response, the PNP chief said he could not understand why Magalong was trying to implicate him in the controversy.

“I really don’t know what personal gripes Mayor Magalong has against me because this happened in 2013. What I have in 2013 was a pickup truck,” Albayalde said.

“I don’t know what Magalong is trying to prove here. But as I have said, we have papers here that would show that we are dead serious in the fight against illegal drugs and against [corrupt policemen],” he said.

Albayalde argued that Magalong could have ensured the dismissal from the service of Baloyo and the others since he served as CIDG chief and later as head of the PNP Directorate for Investigation and Detective Management.

“We are seemingly being blamed [for] the problem on illegal drugs now. My question is, why is our drug problem has become this big when in fact there are people there like General Magalong then,” Albayalde said.

“He could have done everything with all his power and his authority to address this matter [at the time],” he said.

Albayalde confirmed that he called Aquino sometime in 2016, but maintained that it was only to ask about the status of the case of Baloyo and the other officers.

“I called [Aquino] because the families of my former subordinates also asked me about the cases filed against them,” he told Gordon.

Gordon found Albayalde’s request to Aquino inappropriate and said it would not help efforts to rid the PNP of so-called ninja cops, or law enforcers who pilfer seized drugs and sell these.

“How do we get rid of this if your officers are trying to get people off the hook. Are you the mafia or the PNP?” Gordon asked.

The dismissal order for Baloyo and his men issued in November 2014, but was served on them only in March 2016.

They brought a motion for reconsideration the same month, and in October 2017, the penalty was amended and they were demoted to a lower rank.

In an interview, Albayalde surmised that his being tagged in the controversy may be linked to his retirement next month and the appointment of his successor.

Pressed to explain why Magalong would go after him, Albayalde said: “I don’t know. Probably it involves my retirement or who wants to be the next PNP chief.”

Albayalde said Magalong’s remarks during the hearing were “already personal,” adding that the mayor was “putting words into Aquino’s mouth.”

He reiterated that he did not ask Aquino to drop the dismissal order against his former subordinates as clarified by the PDEA chief.

“You [heard] Aquino saying that he was just confused. He doesn’t know why Magalong was speaking for him. Let him talk. I think Aquino has his own decision,” the PNP chief said.

During the hearing, Magalong also said that in February 2014, Purisima directed him to investigate the Pampanga policemen after receiving information that intelligence officers in the provincial office had acquired SUVs.

This was after they conducted an operation that netted 38 kg of shabu, he said.

After investigating, Magalong said his team established that the seized drugs actually amounted to 200 kg of shabu, based on witness testimonies and reenactment of the operation.

Witnesses said four people had to carry a piece of oversized luggage filled with shabu, and the drug was spilling out of it, he recalled.

Further investigation found that drugs were flooding Region 3 and the street price of shabu went down to P4,000 per gram from P5,500 to P6,000 per gram, Magalong said.

Different man
He also learned that the Pampanga policemen arrested drug suspect Johnson Lee, but a different suspect, Ding Wenkun, was later presented to the public.

“Those who witnessed the turnover said ‘Sir, he was not the one arrested, they are presenting a different man,’” Magalong said.

His sources told him Lee paid P50 million for his freedom.

Then PNP Region 3 police chief Raul Petrasanta conducted his own investigation into the operation and filed administrative and criminal cases against the policemen.

But Magalong said lawyers found the criminal case to be weak as it was not backed by properly documented evidence and was filed hastily. They had to convince Petrasanta to withdraw the case and it took them two months to get him to agree.

A “very strong” case was later filed against the policemen, and he said he kept a close watch on this until his retirement. There had been not much progress up to his retirement in 2016, Magalong said.

He also learned later that Petrasanta signed a decision in the administrative case in November 2014 ordering the dismissal of the policemen for grave misconduct.

But the order was never implemented. In 2017, Magalong said he got a copy of an order saying the policemen were only demoted.

The new order was signed by the then PNP Region 3 office chief Amador Corpus.

Corpus said the penalty was reduced to demotion based on the officers’ motion for reconsideration.

But Corpus said that upon review, one of the two aggravating circumstances cited — the use of fraudulent means in the operation — was found to be already absorbed by their grave misconduct offense. This was why the penalty was modified, he added.