Tropical Storm whipping at Mexico’s coast for a 3rd day 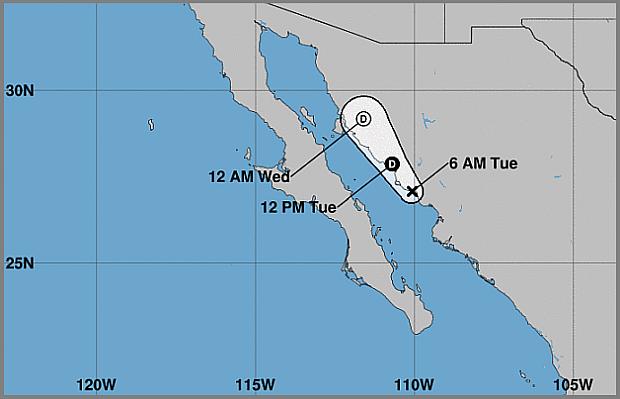 MEXICO CITY — Tropical Storm Narda is still swirling up the Gulf of California, raking Mexico’s coast for a third day with heavy rain and strong winds, though without causing any serious damage.

Forecasters said the storm was expected to keep hugging the shore Tuesday and warned that dangerous flash floods remained a threat for northwestern Mexico. Narda was predicted to begin losing power late in the day.

On Monday, the storm drenched the resort city of Mazatlan with sheets of rain and whipped palm trees with winds, swamping streets and causing some property damage. Earlier it passed over Puerto Vallarta, another popular beach destination.

The U.S. National Hurricane Center in Miami said Narda’s maximum sustained winds had decreased to 45 mph (75 kph) by late Monday, when its center was about 5 miles (10 kilometers) west of the coastal city of Los Mochis. It was heading northwest over the Gulf of California at 20 mph (32 kph).

The Hurricane Center said Narda could drop an additional 2 to 4 (5 to 10 centimeters) of rain along the coast in Sinaloa and Nayarit states, with isolated totals of 10 to 15 inches (25 to 38 centimeters). Significant rainfall was also expected in the states of Chihuahua, Durango, Sonora and Baja California Sur.

Mexican media reported two deaths occurred in the southern state of Oaxaca as Narda passed by on Sunday: a 26-year-old man who died while trying to cross a river in San Pedro Mixtepec and a 17-year-old boy who was swept away in a river at San Jeronimo.

Meanwhile in the Atlantic, Category 2 Hurricane Lorenzo was on a path that could take it close to the Azores, a Portuguese island chain, where authorities issued a hurricane warning for central and western islands and a tropical storm warning for two eastern ones.

According to the current forecast, Lorenzo’s center could pass near the Azores by early Wednesday.

The Hurricane Center said the “very large” storm had maximum sustained winds of 105 mph (165 kph) Monday, with hurricane-force winds extending out to 105 miles (165 kilometers) from its center. It was moving north-northeast at 20 mph (31 kph) and was centered about 840 miles (1,350 kilometers) west-southwest of the Azores.

Lorenzo was previously a Category 5 hurricane, the strongest storm ever observed so far north and east in the Atlantic basin.