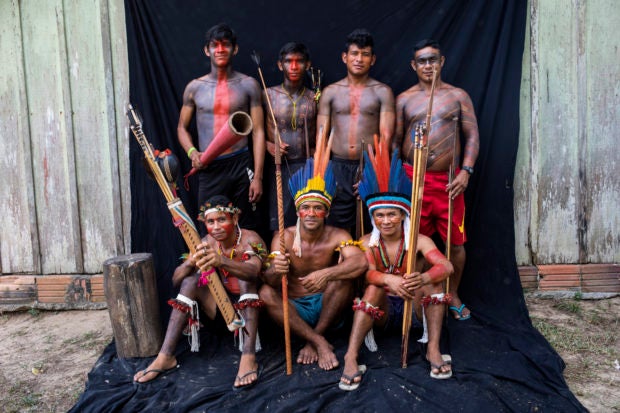 In this Sept. 3, 2019 photo, Tembe warriors pose for a portrait during a meeting of Tembe tribes in the Tekohaw village, in the Alto Rio Guama Indigenous Reserve, in Brazil’s Para state. (AP Photo/Rodrigo Abd)

ALTO RIO GUAMA INDIGENOUS RESERVE, Brazil — The Tembe indigenous people of Brazil’s Amazon rainforest for generations have painted their bodies for rites of passage, weddings, and to symbolize that they’re ready for war.

They use the black dye extracted from the Jenipapo tree to mark the moment when the young reach adulthood and daub themselves in the red dye from the urucum seeds to prepare for battle. They have been contemplating the skies since ancestral times, and the designs on their skins include stars, half-moons, and suns. Sometimes, they are geometrical or take the shape of butterflies or the paws of jaguars that roam the jungle.

“The designs for the Tembe are the historical marks of our people,” Sandra Tembe told The Associated Press. “The body paintings are a symbol of our link to nature,” said Sandra, the director of the school at Tekohaw village, where the walls are adorned with paintings of indigenous maracas and Amazonian animals like piranhas and snakes. She wore a painted red eye mask and earrings made with yellow and red feathers. 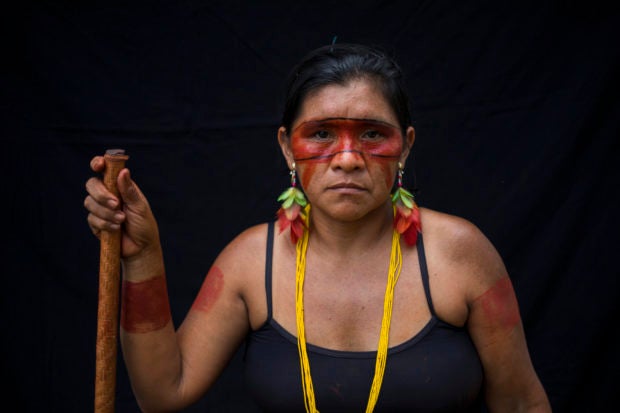 In this Sept. 3, 2019 photo, Sandra Tembe, 46, poses for a portrait during a meeting of the Tembe tribes in the Tekohaw village, in the Alto Rio Guama Indigenous Reserve, in Brazil’s Para state. “The body paintings are a symbol of our link to nature,” said Sandra, the director of the school at Tekohaw village, where the walls are adorned with paintings of indigenous maracas and Amazonian animals like piranhas and snakes. (AP Photo/Rodrigo Abd)

Tembe children attend school and learn about the tribe’s traditions while they grow up speaking Portuguese and their native Tenetehara tongue that is part of the Tupi-Guarani family of languages. Teenagers play soccer, swim in rivers and help their families tend fruits and vegetables or hunt and fish animals from the jungle that are later cooked on wood fires. Women have organized in associations and gained an influential role as social activists fighting for the preservation of the environment and indigenous rights.

“Women teach children knowledge about their culture, the way the tribe is organized, customs and coexistence in the village,” Sandra said. “Women are also “an important part of the fight for their territory.”

Tembe warriors wear colorful headdresses of the macaw and other feathers and wield bows and arrows for hunting and to protect their Alto Rio Guama reserve, which is constantly under threat in the globally vital Amazon region. 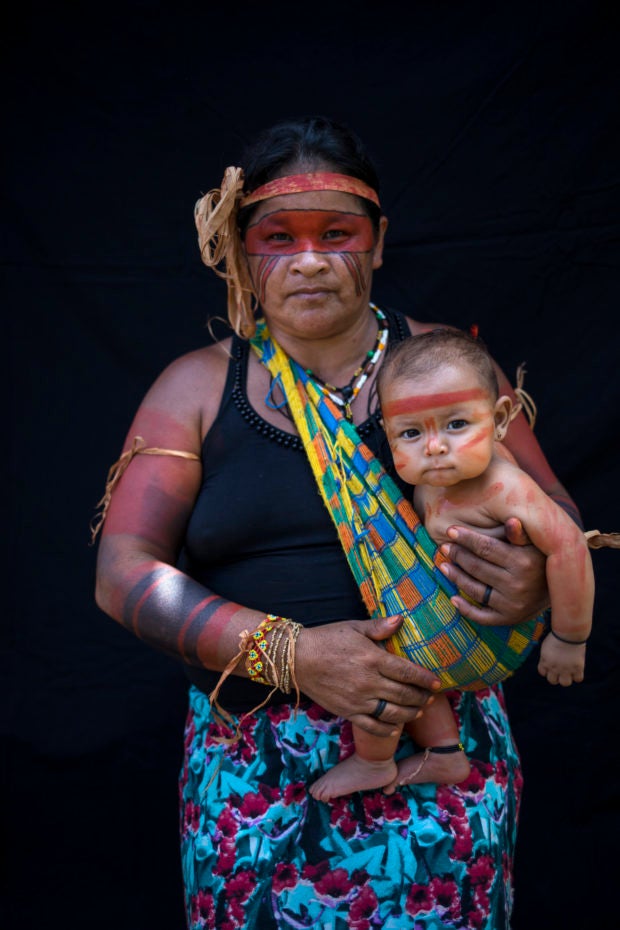 In this Sept. 3, 2019 photo, Uiraputeru Tembe poses for a portrait with her three-year-old grandson Curateiai Tembe during a meeting of the Tembe tribes in the Tekohaw village, in the Alto Rio Guama Indigenous Reserve, in Brazil’s Para state. The indigenous reserve is officially protected, but it’s constantly under siege by loggers who illegally try to extract prized hardwood. (AP Photo/Rodrigo Abd)

Recent clashes prompted some members of the Tembe to burn the trucks and equipment of illegal loggers on their territory, which is located in a Brazilian state plagued by thousands of fires burning on cleared jungle lands.

“The Amazon is ending and that’s why we’re here – so that it doesn’t end,” said Lorival Tembe, the eldest chieftain, and founder of the Tekohaw village, where about 600 members of the tribe live. /kga