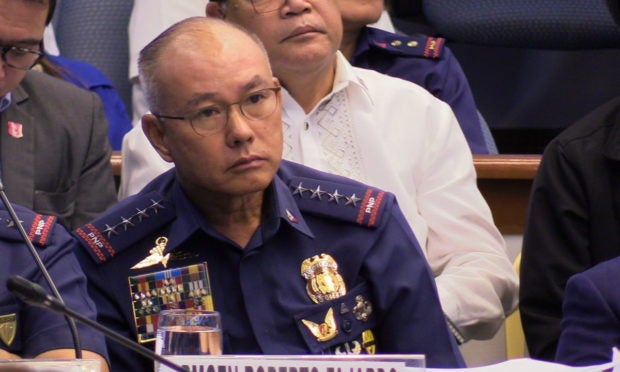 MANILA, Philippines — The Philippine National Police (PNP) is ready to file charges against 13 police officers and dismiss them if warranted for failing to account for the bulk of crystal meth seized during an anti-illegal drug operation in Mexico, Pampanga in November 2013.

PNP chief Gen. Oscar Albayalde, who was the director of the Pampanga Provincial Police Office when the operation took place, announced this on Tuesday during a Senate hearing on the so-called ninja cops — officers who recycle illegal drugs seized during police operations.

The 13 police officers were initially ordered dismissed. But they only demoted by one rank after filing a motion for reconsideration in March 2016.

According to Albayalde, the Department of Justice (DOJ) is still undergoing a review of the dismissal of the grave misconduct case against the officers.

“I don’t think it’s OK that [all we have are] allegations and the case was dismissed based on merits, according to the papers,” he added.

At the same hearing, Justice Secretary Menardo Guevarra: “I have instructed the state prosecutors concerned to expedite the resolution of the automatic review. All records are with us so I hope within a month’s time, a resolution will be issued by the Department of Justice one way or another.”

READ: DOJ to come up with resolution on case vs 13 Pampanga cops in a month