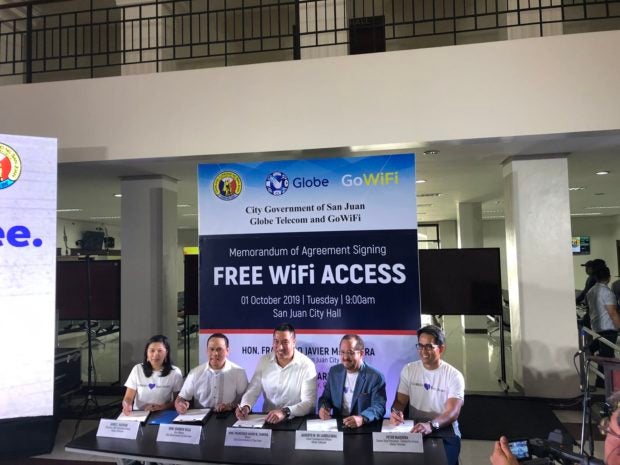 MANILA, Philippines — San Juan City dwellers would soon enjoy free internet access as the local government and a telecommunications firm forged an agreement for the establishment of Wi-Fi zones in all 21 barangays and certain public areas in the city.

According to Zamora, the partnership with Globe Telecom is part of the local government’s effort to transform San Juan into a “progressive high-tech city.”

“To make San Juan a progressive high-tech city, the backbone really is providing good Wi-Fi access and internet to constituents,” Zamora told reporters in an interview after the ceremonial signing of the memorandum of agreement at San Juan City Hall.

Last week, the San Juan City government also inked a pact with the Department of Information and Technology (DICT) for free Wi-Fi zones in 21 barangays including health centers and basketball courts, public parks and schools, and police community precincts.

READ: San Juan’s 21 barangays to have Wi-Fi zones by year-end

For Zamora, it is better to have two Wi-Fi service providers since “eventually I would like the entire city of San Juan to be accessible to free Wi-Fi.”

“This is just a start,” the local chief executive said. /kga