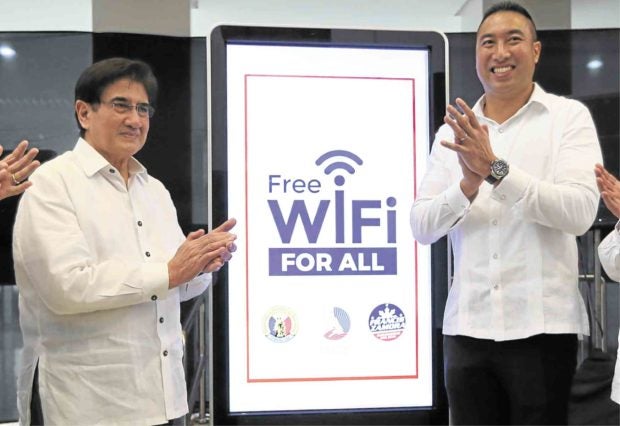 MANILA, Philippines — San Juan City is all set to be the country’s first Wi-Fi connected city.

Secretary Gregorio “Gringo” Honasan II of the Department of Information and Communications Technology (DICT) and Mayor Francis Zamora inked a memorandum of agreement on Monday formalizing San Juan’s elite status as the pilot city for the DICT Free Wi-Fi for All program.

Before the end of the year, Wi-Fi zones would be installed in all of the city’s 21 barangays, the local government said.

There will also be access points at all barangay halls, health centers and basketball courts, public parks and schools, and police community precincts.

Zamora’s pledge to blanket the city with Wi-Fi zones was a main fixture of his insurgent campaign for mayor and integral to his vision of transforming San Juan into a “smart city.”

The Wi-Fi zones—fully funded by the DICT—would also lay the groundwork for a planned mobile app that would link residents to city hall.

Read Next
Parañaque under state of calamity due to dengue
EDITORS' PICK
A gem of a residence in the new normal
Been there, done that but what’s the difference between MECQ and GCQ?
BREAKING: 3,226 latest COVID-19 cases bring PH’s total to 106,330
Water remains our saving grace right now
PNP: Checkpoints back in MECQ areas
Smart 5G goes live
MOST READ
MECQ guidelines in infographics
MECQ in NCR, other areas: Mass transportation suspended, quarantine pass required anew
Duterte heeds frontliners’ plea, reimposes MECQ in Metro Manila, other areas Aug. 4 -18
Doctors group to Duterte: ‘There was never a call for a revolt’
Don't miss out on the latest news and information.