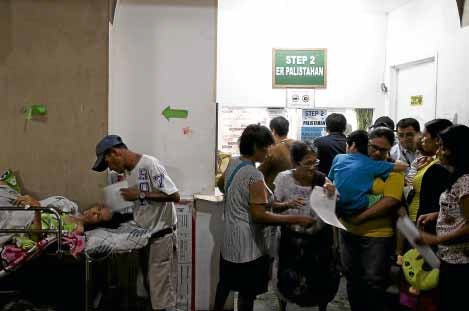 LONG LINE Patientswaiting to be attended to at the Philippine General Hospital. —RICHARD A. REYES

“While many [Filipinos] are getting sick, we are slashing our budget for hospitals,” Recto told the Inquirer.

“When lives are at stake, that’s another story. So I think our treatment of the budget for hospitals should be different [from other state agencies],” he said.

Asked to describe the government’s treatment of the public health services, the Senate leader said: “We are not giving it importance. That’s basically what it is.”

“Funding for [PGH] is the national barometer of our health priorities. It is the national hospital, so the money it gets from the government reflects the importance [the] government gives to health,” he said in a separate statement.

“If the national budget increases every year without fail, then the budget of PGH must rise with it. Or at the very least, the amount be retained, which if inflation is factored in, actually constitutes a reduction,” he added.

Recto’s remarks came after the Inquirer published a special report on the overcrowding in PGH, which highlighted the state-owned hospital’s lack of facilities for its patients, a majority of whom are indigents from the provinces.

According to the Senate leader, the Department of Budget and Management (DBM) earmarked only P2.77 billion for PGH’s expenses next year, or a 14-percent drop from the P3.23 billion that Congress allocated in 2019.

“The proposed 2020 budget of the PGH will harm its patients. Not only must the cuts be restored, its budget must be increased,” he said.

“The PGH is often the first option and the last resort of the poor and the middle class to get the best medical treatment, so any cut on its budget hurts the deepest,” he added.

Recto earlier disclosed that the Department of Health (DOH) and Philippine Health Insurance Corp. had been shortchanged by P28.3 billion in their share of the sin tax collection in the Duterte administration’s proposed P4.1-trillion spending program for 2020.

He also urged the DBM to restore the P10-billion cut in the health department’s expenditure for its Health Facilities Enhancement Program, saying the government’s budget planners should refrain from treating public spending like an “accounting ledger.”

The reduction in PGH budget, Recto noted, would translate to P1.25 million less in daily allotment for its operations.

The House of Representatives, however, has moved to restore P200 million in the budget of PGH amid complaints of crowded and overstretched facilities, although it’s still less than half of the P456-million cut suffered by the state-run hospital.

Half of the amount would go to medical services and the other half to a quick-response fund, according to Speaker Alan Peter Cayetano, who announced the P9.5 billion worth of “institutional amendments” made by the House to the proposed P4.1-trillion budget for 2020.

On top of the additional funding for PGH, the House also put in another P200 million in the budget of the DOH, split evenly between the National Center for Mental Health and a quick-response fund, Cayetano said at a press conference.

The House approved the proposed budget for 2020 on third reading on Sept. 20, but allowed itself a window of time to make changes to the proposal through a small committee, a process questioned by senators.

Cayetano gave details on the P9.5 billion worth of amendments collected and approved by the small committee last week.

The biggest realignment, he said, was the infusion of an additional P3 billion to the original P7-billion fund to buy palay, or unhusked rice, from local rice farmers devastated by rice import liberalization.

Another P500 million was realigned to the budget of the Department of Agriculture for a quick-response fund that would enable the agency to respond immediately to emergencies, such as the outbreak of African swine fever.

The Department of Education’s budget was also augmented by P800 million, with P650 million going to the operations of schools for the K-12 program, and the rest going to modal day care centers, Cayetano said.

The Speaker said P1 billion was added to the budget of the Department of the Interior and Local Government, including a P100-million camp development fund for the Armed Forces of the Philippines.

A P500-million fund was also added for the national electrification program. The same amount was realigned to the environment department for its national resources conservation and development program, Cayetano said.

Finally, the House put in another P500 million in the budget of the Metropolitan Manila Development Authority to cover salary increases for its 4,000 job-order personnel, and a special allowance for traffic enforcers and field workers.

Cayetano earlier said the funds would come from unused right-of-way funds and from the allocations for the scheduled 2020 barangay and Sangguniang Kabataan elections, which Congress planned to postpone until 2023.