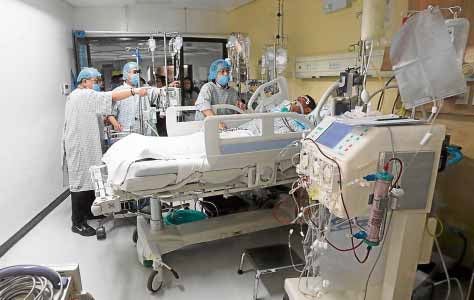 ‘THE BEST THAT CAN BE DONE’ Health Secretary Francisco Duque III(third from left) visits a patient at the intensive care unit of the National Kidney Transplant Institute. —GRIG C. MONTEGRANDE

MANILA, Philippines — On a rainy Friday afternoon, Flaton Solano had been in line for some four hours already as he waited his turn to undergo dialysis at the National Kidney and Transplant Institute (NKTI).

Yet it wasn’t the longest that Solano, 61, had waited for his required thrice-a-week dialysis session. Previously, he and his wife, Hanlourd, waited for seven hours.

The couple, who arrived in Manila from the island-province of Romblon in June, said they were getting used to the wait. They said they had “no other choice.”

Hanlourd said they were advised by doctors in Romblon Provincial Hospital to seek treatment at the NKTI — some 400 kilometers away from their home — as the local hospital wasn’t equipped to handle her husband’s condition.

She acknowledged that her husband, a former chair of Barangay Lusong in San Agustin town, would not have found himself in such a situation had he continued taking his medicine for kidney stones, seen his doctor for checkups, and stopped his unhealthy lifestyle three years ago.

“He used to take oral medications to dissolve the stones. He stopped taking them when he felt better, then he went back to drinking soft drinks first thing in the morning, and to eating salty food,” she said.

Although Solano said he wasn’t diagnosed with diabetes — one of the preconditions to kidney failure — his lifestyle had put him at great risk of suffering from kidney disease.

The NKTI estimates that every hour a Filipino develops chronic renal failure, which can be prevented through healthy diet, drinking plenty of water, and avoiding excessive salt. Of those diagnosed with end-stage renal disease, the NKTI said, almost 60 percent have diabetes or hypertension.

Around 78,000 Filipinos are now registered as suffering from end-stage renal failure and in need of dialysis, according to Health Secretary Francisco Duque III.

Due to the “really exorbitant” costs of treating kidney disease, the NKTI administration pointed out, “the best that can be done at present is to focus efforts on the prevention of progression of renal diseases.”

“Strict blood pressure and glycemic control and adoption of a healthy lifestyle play a major role in reducing, if not totally controlling, the epidemic of renal failure. This can be achieved through proper education,” the NKTI said in an advisory.

For people with diabetes or hypertension, taking maintenance medicines can protect and prolong the health of their kidneys. The cost: around P100 a day.

Such a preventive attitude will also help ease the financial burden on Philippine Health Insurance Corp. (PhilHealth), which can otherwise use its funds to support the hospitalization of patients suffering from other chronic diseases like cancer.

Based on PhilHealth data, the state insurance firm shelled out last year more than P10.8 billion for hemodialysis procedures alone, up from the nearly P8.4 billion spent in 2017. The amount accounts for 33 percent of all procedures paid for by PhilHealth to private and public health care institutions.

The Department of Health (DOH) and various medical societies have repeatedly lamented Filipinos’ penchant for seeking professional help only after their conditions have worsened.

This behavior is often due to such factors as the inaccessibility or inadequacy of health care facilities and services in their area or simply people ignoring their ailment because of poverty.

For many Filipinos, being diagnosed with an illness means having to take medicines—considered a luxury by those hard-pressed to make ends meet.

Officials hope that with the rollout of the landmark universal health care (UHC) program this year, the rising number of preventable illnesses will finally decline. After all, UHC is designed to focus on strengthening the delivery of primary health care services.

The World Health Organization defines primary health care as a “whole-of-society approach to health and well-being” ensuring that people “receive comprehensive care—ranging from promotion and prevention to treatment, rehabilitation and palliative care—as close as feasible to people’s everyday environment.”

Under Republic Act No. 11223, or the UHC Act, the government will adopt “an integrated and comprehensive approach to ensure that all Filipinos are health-literate, provided with healthy living conditions, and protected from hazards and risks that could affect their health.”

For nearly 30 years, the delivery and promotion of health services have been devolved to local officials, as provided for in the Local Government Code of 1991.

This setup should have ensured that health programs were tailored to fit the needs of the community because local governments were authorized to implement primary health care projects as well as communicable and noncommunicable disease control services.

But because funding and commitment to the delivery of health services varied among cities and municipalities, a Makati City resident may be getting more and better health packages than a resident of, say, Shariff Aguak in Maguindanao.

And then there’s the reality that politics looms large over the provision of health services.

“Right now, when you have a good local government, you’re lucky; you’re unlucky if you have a bad one. That shouldn’t be the case,” said Dr. Minguita Padilla, coconvener of Doctors for Truth and Public Welfare.

“What keeps a patient from taking medicines is money. People shouldn’t be asking. It shouldn’t be like you’re doing them a favor. It’s a right, not a privilege,” Padilla said.

With UHC, it is envisioned that Filipinos, wherever they are, would be entitled to the same basic services that are more focused on preventive and promotive, rather than curative, care.

“PhilHealth’s current Z package for kidney transplant is P600,000; for coronary artery bypass, it’s P550,000 per patient. What if you can prevent these by taking maintenance medicines? That’s what UHC can do. It’s prioritizing preventive and promotive care, which is hopefully what will happen,” Padilla said.

But this early, UHC implementation appears on track to falling victim to politics.

According to Dr. Mar Wynn Bello, officer in charge of the DOH’s Bureau of International Health Cooperation, local chief executives have openly threatened to file an injunction against the law should the DOH push for the integration of health resources and facilities at the provincial level.

This key UHC provision, intended to close the gaps brought by devolution, means that mayors will cede control of and supervision over health personnel and facilities to a provincial health board.

They will also be required to pool their resources for a special health fund, which the board will manage.

“[N]ot all local government units are willing to give up their health workers [and] facilities to the provinces,” Bello earlier told reporters. “Of course, properties and people are sources of power. If you lose them, you will be losing your source of power.”

This means that for patients like Flaton Solano, it’s essentially going to be more of the same, especially that the DOH is leaning toward yielding to the mayors just to avoid legal challenges to UHC.

“There will be different degrees of implementation in terms of the provision of health services. It will remain the same. It’s like nothing has changed, except that everyone is now enrolled in PhilHealth,” Bello said.

At the Philippine General Hospital (PGH), the Consolidated Council of Health and Allied Professions (CCHAPS) said the nurse-patient ratio should be 1:12.

But the current nurse-patient ratio at PGH can rise to around 1:20, said CCHAPS chair Jen Fabros. “That’s really difficult. Giving medicines to patients would already take up much of your time, then you would also have to do charting,” she said.

Furthermore, nurses across the country are overburdened and underpaid, Fabros said. Not all receive the minimum Salary Grade 15 assured under RA 9173, or the Philippine Nursing Act of 1991. Depending on the class of the city or municipality, SG15 ranges from P19,845 to P30,531.

There are a reported 800,000 registered nurses nationwide. But low pay and lack of security of tenure push nurses to work locally for only two years and then seek better opportunities abroad.

The CCHAPS estimates that in government hospitals, the turnover rate of nurses can reach 30 percent every month, and in private institutions, 15 percent.

An entry-level nurse “commonly receives an average salary of P9,757 per month,” according to the Department of Labor and Employment.

Under Section 23 of UHC, the DOH is tasked to formulate and implement a national master plan that will provide strategies for the hiring, retraining and retention, among others, of health workers “based on population health needs.”

“To ensure continuity in the provision of health programs and services, all health professionals and health care workers shall be guaranteed permanent employment and competitive salaries,” the law reads.

While the implementation of UHC will cause a “radical change in the health system,” Fabros said, it remained to be seen if its promises would truly be fulfilled.

As a result, there may be fewer cases like Solano’s, with people not only more informed but also better equipped to take care of themselves.