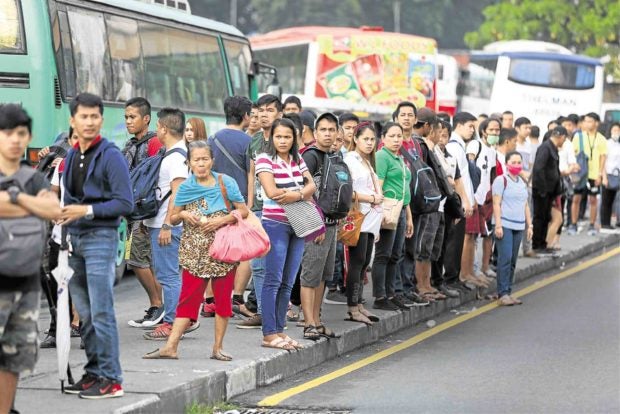 Jeepney drivers would stage a strike and claim victory, and the government would declare the mass action in Metro Manila a failure, even as it conveniently ignores strikes in other parts of the country.

And so it was on Monday during the transport strike against the phaseout of old jeepneys by July 2020.

The mass action was the 12th against the government program over the past two and a half years.

Alliance of Concerned Transport Organizations (Acto) president Efren de Luna claimed 90 percent of jeepney drivers and 80 percent of UV Express drivers across the country stopped their operations on Monday, which would mean more than 500,000 drivers overall.

Transport groups in Mindanao did not join the mass action. One group instead staged a picket.

The Land Transportation Franchising and Regulatory Board (LTFRB) said movement in most commuter hubs in Metro Manila normalized quickly.

The Metropolitan Manila Development Authority (MMDA) said the impact of the strike was minimized as local governments provided shuttle services for stranded passengers.

“Were they successful? No. Because the government will never allow them to be successful,” MMDA spokesperson Celine Pialago said.

The Alyansa Laban sa PUV Phaseout—which includes Acto, Piston, Stop and Go Coalition, Federation of UV Express in Luzon and No To Jeepney Phaseout Coalition—wanted to register its objection to the July 1, 2020, deadline given by the LTFRB, after which older vehicles will be phased out.

Operators are required under the modernization program to replace their jeepneys with vehicles that have Euro-4 compliant engines, which would cost P1.4 million per jeep for a fleet of 10.

Drivers and operators said they could not afford to pay up P20,000 per month, or P800 a day to cover the amortization, because of the rising prices of diesel and gasoline.

LTFRB Chair Martin Delgra said the success of the strike was a “matter of perspective,” arguing that a lot more groups are supportive of the modernization program.

But De Luna said Delgra should go into the streets and see for himself what the strike had been like.

He also disputed the characterization of the MMDA, which claimed that the strike was unsuccessful because it failed to paralyze the metropolis.

“How would it have been possible for commuters to be stranded en masse when school and work had been canceled?” De Luna said.

Anticipating the potential impact of the strike, the MMDA had lifted number coding for all PUVs and the mayors of the cities of Pasay, Manila, Parañaque, Muntinlupa, Marikina, Pasig, Las Piñas, Caloocan and Valenzuela had suspended classes.

Organizers have said that the livelihood of 500,000 jeepney drivers and 80,000 UV Express drivers are imperiled by the modernization program.

The issue, they say, is not modernization per se but the “impossible” compliance requirements and lack of job
security.

The groups argue that asking them to surrender their individual franchises and form cooperatives opens the floodgates for corporations to swoop in and control their operations.

Angelito dela Rosa, president of Samahang Victory Operators-Drivers ng Malabon, Acacia and Monumento, said his group was fighting for a good cause.

“We only want to have a voice. Imagine if your own father was a jeepney driver and he was forced to pay millions of pesos for an upgrade. How can he afford that? How can he even send his children to school?” Dela Rosa said.

Despite the large number of participants cited by the protest leaders, some groups in the strike refused to participate, including jeepney cooperative Pasang Masda.

At a press briefing, Obet Martin, Pasang Masda president, said the three-year transition period initially set by the Department of Transportation to operators was sufficient.

Jeepney drivers and operators in Angeles City joined the strike through a symbolic protest in front of the LTFRB regional office.

In Baguio City, about 300 jeepney operators and drivers from 18 associations and two federations joined the strike.

Fifty members of Piston-Cagayan Valley took part in a caravan and picket in Santiago City.

In Laguna, where jeepneys are a major public transportation, traffic was paralyzed in the first and second districts of the province or from San Pedro City up to Los Baños town.

Many jeepneys from San Pablo City, where key terminals are located, also joined the protest.

Several local governments in Laguna, Quezon and Rizal called off school. Classes in schools throughout Cavite province were suspended.

The strike prompted mayors in Negros Occidental to call off school.

No strike in Mindanao

In Davao City, jeepney drivers and operators were against the government transport program but did not join the strike. Instead, they held a picket at the LTFRB office.

Their counterparts in Iligan City—the Coalition of Lanao Utility Transport for Change (Clutch) and its national ally the National Confederation of Transport Union—did not join the strike.

Raul Permites, Clutch chair, said the group staged a strike in February 2017 against the modernization, which Piston and allied groups did not join.

“[The government has already explained the] modernization program [to us] and we understand,” Permites said.