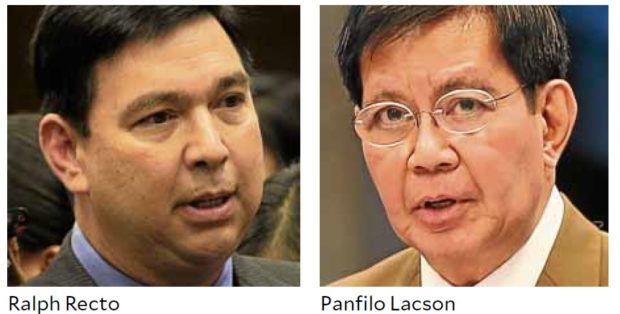 MANILA, Philippines — Senate President Pro Tempore Ralph Recto on Sunday urged the Department of Budget and Management (DBM) to stop treating public spending like an “accounting ledger” and open its eyes to the people’s needs.

The Senate leader issued the call as he moved for the reinstatement of the P10-billion reduction in the infrastructure budget of the Department of Health (DOH) for its Health Facilities Enhancement Program (HFEP) for 2020.

According to Recto, Congress has allocated P15.9 billion for HFEP for 2019, but this is dramatically reduced to P5.9 billion in the latest budget proposal submitted by the DBM.

“The [HFEP] is the cure to the inadequate and dilapidated facilities of public hospitals,” he said in a statement.

“But how much did the DBM recommend for HFEP in 2020? P5.9 billion. It was cut by two-thirds. It is the budgetary equivalent of cutting the calorie intake of a malnourished child,” he added.

Recto earlier disclosed that the DOH and Philippine Health Insurance Corp. were shortchanged in the government’s proposed P4.1-trillion spending program for 2020 by about P28.3 billion in their share of the sin tax collection.

As mandated by Republic Act No. 11346, he said the new tax law specifically allotted for health services 50 percent of all collections from the excise tax on sin and soda products.

Recto said the DBM should not invoke underspending as an excuse to reduce the budget of the DOH for HFEP.

He pointed out that many of the items to be purchased under the program were hospital equipment regarded as “off-the-shelf items” that could be procured easily.

Others, he added, were allocated for hospitals managed by local governments, many of which were set to get just P500,000 for new equipment.

“At this level of funding, the usual ‘absorptive capacity’ excuse cannot be invoked. Even doubling the amount will not make procurement work twice as hard,” Recto argued.

He said the government should prepare a budget based on what the people need. “It cannot be reduced to a spreadsheet exercise, lifted from a foreign-funded budgeting manual.”

On Sept. 20, the House passed the 2020 budget bill two weeks ahead of schedule after President Duterte certified it as urgent and did away with the three-day notice rule between second and third reading.

Instead of introducing amendments in plenary session, however, the House formed a “small committee” to accept proposed changes to the budget after it was already approved on third reading, a process questioned by the senators.

The House defended the move, noting that with 300 members, there wouldn’t be enough time to deliberate on all the amendments.

The small committee, according to House leaders, realigned about P10 billion worth of funding to augment the budgets of national agencies for health, agricultural and educational programs.

The money was to be taken from the allocations for the scheduled 2020 barangay elections, which Congress plans to postpone, as well as unused right-of-way payments.

In a troubling sign for the 2020 budget, the rift between the Senate and the House of Representatives grew wider over the weekend, as three more deputy speakers entered the fray to lob attacks against two “obstructionist” senators.

Lacson has taken to task members of the House for their supposed plan to set aside P1.5 billion for each of the 22 deputy speakers and P700 million for every district representative. The senator later claimed that the plan was shelved after he made it public.

Savellano, a representative of Ilocos Sur, laughed off Drilon’s claim of possible irregularities in the House approval of the 2020 budget, recalling that the Senate minority leader had “benefited” from pork funds in the previous administration.

“Senator Drilon, let’s respect one another. Please refrain from prejudging and criticizing us without basis because your statements might boomerang on you,” he said.

As for Lacson, Savellano appealed to the senator not to try to score political points at the expense of the House or to use baseless allegations “in aid of his election.”

Oaminal, of Misamis Occidental, said the GAB was aligned with the administration’s reform initiatives and, thus, is “free of any ‘pork’ or ‘insertions’ and does not allow any ‘parking’ of funds.”

In a radio interview on Sunday, Sen. Juan Edgardo Angara said the Senate would not allow pork items and lump-sum appropriations for legislators in the proposed expenditure program for 2020. —Reports from Marlon Ramos and DJ Yap