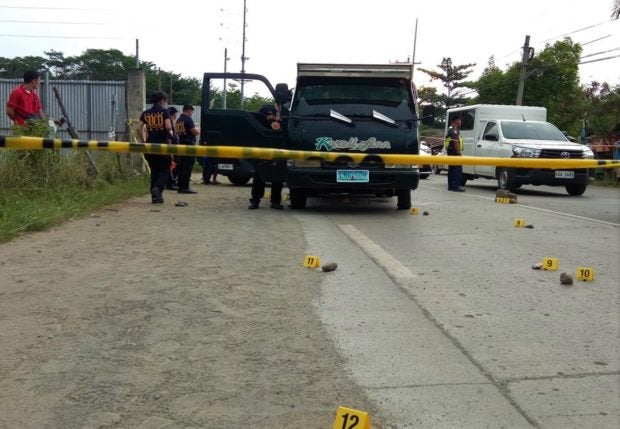 Police secure the crime scene where two people, one of them a National Irrigation Administration contractor, were killed by motorcycle-riding gunmen in Barangay Canitoan, Cagayan de Oro City. PHOTO BY MENZIE MONTES

CAGAYAN DE ORO CITY — Authorities are hunting down the gunmen who reportedly shot to death two people, one of them a National Irrigation Administration (NIA) contractor, during what appeared to be a roadside robbery in Barangay Canitoan here Saturday afternoon.

“It appeared the suspects were looking for something inside the truck before they left the crime scene,” said Sto. Domingo.

One of the gunmen was allegedly seen by witnesses pulling out a bag from the truck’s front seat.

Sto. Domingo said Apostol’s wife told the police her husband did not bring a large amount of cash when he went out that day but someone close to Apostol  confirmed the latter was bringing cash meant for the contractor’s employees’ salaries.

“We were also told they (victims) just came from a cockfight in Barangay Pagatpat and that he (Apostol) just bought a cement mixing machine,” the police officer said.

Apostol hailed from Valencia City, Bukidnon province while Campugan came from the town of Kalilangan, also in Bukidnon.

Sto. Domingo said Bulua police investigators were looking into the whereabouts of Apostol’s employees at the time of the shooting as it was probable that the suspects were familiar with the route pattern of the victims.  Investigators have been profiling Apostol’s workers, he added. Bulua police operatives believed the suspects have not yet left Cagayan de Oro.

A copy of the CCTV footage taken shortly before the shooting showed a white car ahead of the victims’ vehicle making a brief stop before speeding off, giving the gunmen time to shoot at the truck’s passengers.

Lt. Fullgen Ragmac of the Scene of the Crime Operatives said they recovered four empty bullets and nine spent casings from the crime scene.

Ragmac said the gunmen appeared to be professional killers as they hit the victims in critical parts of their bodies.

Eyewitnesses said Apostol was still breathing after the suspects left but he did not reach the hospital alive.

Sto. Domingo said Apostol sustained several gunshot wounds in his body while Campugan was hit in the face.

“[The shooting] looked planned. The suspects waited for them (the victims),” he said. He added the attackers appeared to be expecting the victims to pass that way at the exact time.

He also said they were also looking at the possibility that the ambush could have been staged by some personalities who nursed some grudges against Apostol. /je