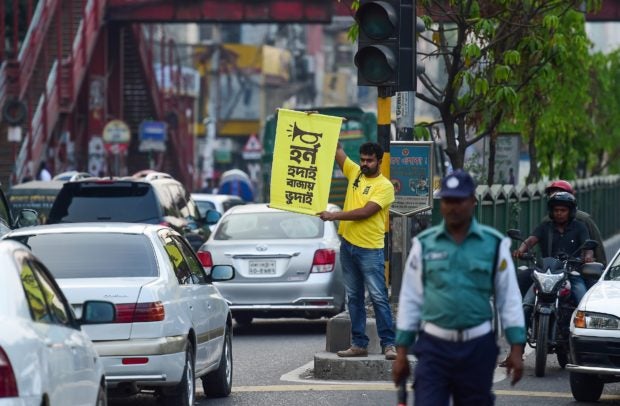 In this photo taken on March 22, 2019, Mominur Rahman Royal holds a banner with a Bengali slogan — “Horn hudai, Bajay Bhudai” that translates to “only the idiot honks horn unnecessarily” — on a busy street in Dhaka. (AFP)

The 36-year-old is on a one-man crusade to reduce unnecessary honking in one of the world’s noisiest cities, where the cacophony of vehicle horns in heavy traffic is as loud as a rock concert.

On the weekend, he stands at a busy intersection near his home holding a yellow placard with the Bengali rhyme “Horn Hudai, Bajay Bhudai” meaning “Only an idiot honks a horn unnecessarily.”

“This is my silent protest against the nuisance. I just try to deliver the message to the people,” he told AFP as cars, buses and trucks rumbled noisily past him.

Since starting his campaign four years ago, the graphic designer said he has received overwhelming support.

“People on their way home stop by to stand by my side, silently holding my placards on the road even though they don’t know me. This is a sign of a positive change.”

Photos of his silent protest have been shared thousands of times on social media, attracting many supportive comments.

According to the World Health Organisation, the maximum noise level that can be tolerated by humans for eight hours without some loss of hearing over time is 85 decibels.

In Dhaka, home to 18 million people and more than a million registered motor vehicles, the sounds of honking can reach 110 decibels during peak hours, according to a 2017 environment department study.

Heavy construction and loudhailers used for political and religious events add to the din that has contributed to Dhaka being regularly ranked as one of the world’s least livable cities.

Around 12 percent of Bangladesh’s 165 million population suffer from hearing problems due to noise pollution, the study found.

“The number of traffic (policemen) coming to the hospital with hearing problems every week has become a major concern for us,” Bangladesh police spokesman Sohel Rana told AFP.

The government has passed anti-honking laws with culprits facing up to six months’ imprisonment.

But the rules are weakly enforced and even illegal ear-splitting police and ambulance horns are used by ordinary drivers.

Royal, who sometimes campaigns after work also, is worried his hearing will suffer due to the amount of time he spends standing at intersections.

But the young father said he would keep going until noise pollution reduces, adding that he was “taking a hit for a greater cause”.

“I strongly believe this abnormal behavior (of honking) will change one day and we will be able to leave a better Dhaka for our future generations.”

Read Next
2 pedestrians killed in separate Quezon road accidents
EDITORS' PICK
IATF to LGUs: Issue ordinances vs attacks on frontliners, COVID-19 patients
Quick chat with Nicole Andersson: ‘You really don’t need much to be happy’
Robredo spox thanks Duterte for defending VP’s efforts vs COVID-19
Diokno to Duterte: OK to make fun of buck tooth, but focus on people’s needs first
Nograles: Cabinet members to donate 75% of monthly salary to aid COVID-19 fight
10 Filipinos positive for COVID-19 in UK, 7 in Ireland — envoy
MOST READ
Coronavirus hotbed Rizal to shut borders on April 6
Gov’t mulling quarantine period extension of 15-20 more days
Sotto on Isko Moreno’s call: We do our job without the media following our every move
Robredo spox thanks Duterte for defending VP’s efforts vs COVID-19
Don't miss out on the latest news and information.