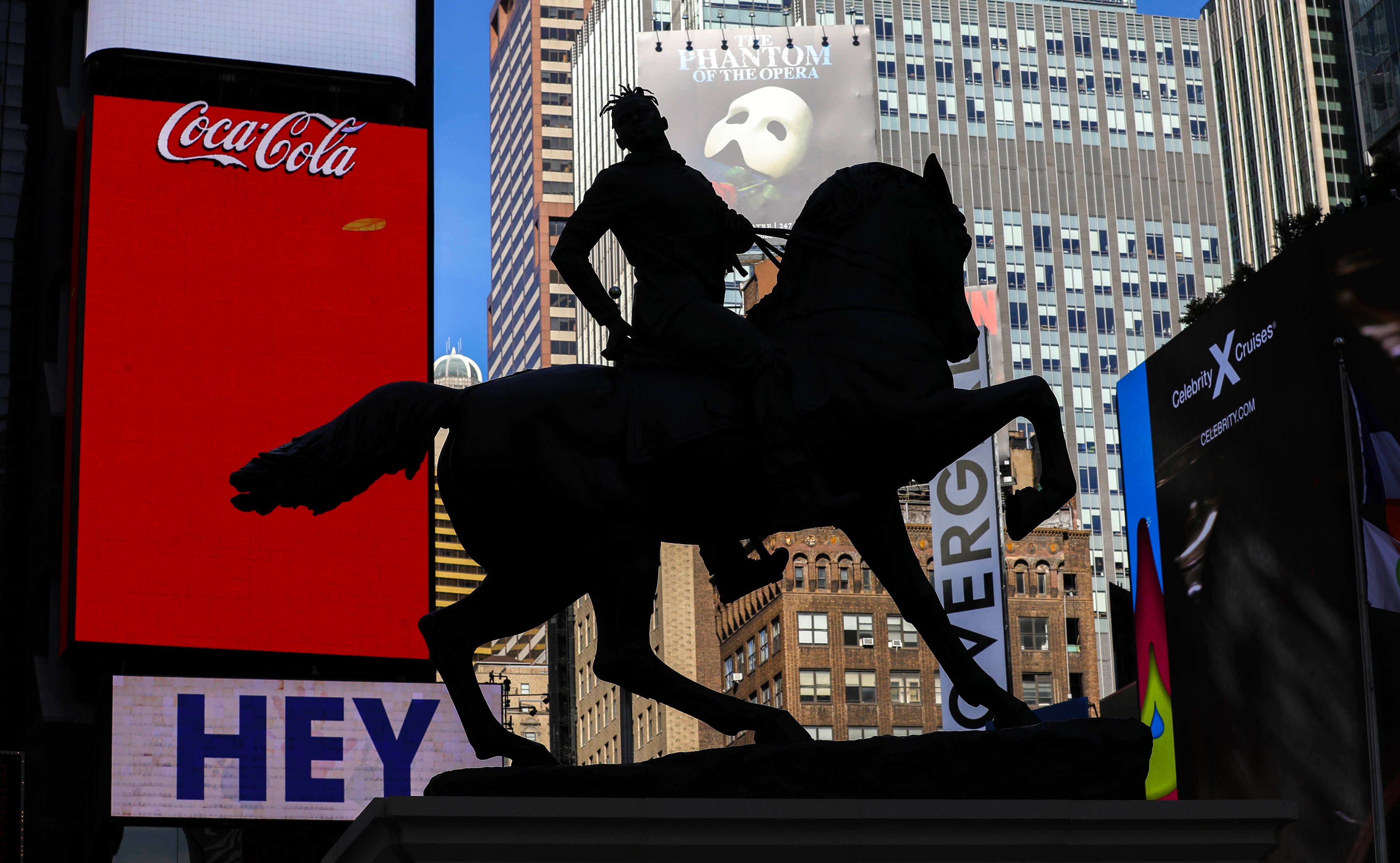 A bronze sculpture, “Rumors of War,” by artist Kehinde Wiley, appears in Times Square at an unveiling on Friday Sept. 27, 2019, in New York. The work, depicting of a young African American in urban streetwear sitting astride a galloping horse, will be exhibited through December 1. (AP Photo/Bebeto Matthews)

NEW YORK  — Perpetually crowded Times Square has a new statue for pedestrians to navigate — but it’s unlike any other.

Called “Rumors of War,” it flips the script on traditional statutes commemorating white generals. Wiley described his bold work as a call to arms for inclusivity.

He told The Associated Press afterward that he hoped young people would see it and “see a sense of radical possibility — this, too, is America.”

The project was born when Wiley saw Confederate Gen. J.E.B. Stuart’s monument in Richmond, Virginia. That 15-foot-tall bronze work portrays Stuart astride a horse and is part of the city’s string of Confederate memorials along Monument Avenue that includes ones for Robert E. Lee, Jefferson Davis and Stonewall Jackson.

“I’m a black man walking those streets. I’m looking up at those things that give me a sense of dread and fear. What does that feel like, physically, to walk a public space and to have your state, your country, your nation say, ‘This is what we stand by.’ No. We want more. We demand more,” he said. “Today we say ‘yes’ to something that looks like us.”

The horse-riding figure in “Rumors of War” — on the Broadway Plaza between 46th and 47th streets — has turned in his saddle, his attention seemingly toward an American Eagle store. His Nikes are firmly in the stirrups and his majestic horse is in movement, focused on something across the street.

“Rumors of War” will display in Times Square until December before finding a permanent home at the Virginia Museum of Fine Arts in Richmond.

For now, Wiley’s work joins other sculptures in the plaza of the so-called Crossroads of the World. There are also statues of Father Francis Duffy and producer George M. Cohan, both white men.

The unveiling was bookended by performances from the marching band from Malcolm X Shabazz High School in Newark, New Jersey. Other speakers at the unveiling included Richmond Mayor Levar Stoney.

“Today is a monumental day,” Stoney said. “In Richmond we have 10 Confederate monuments to the Lost Cause. I think that is 10 too many.”  /muf