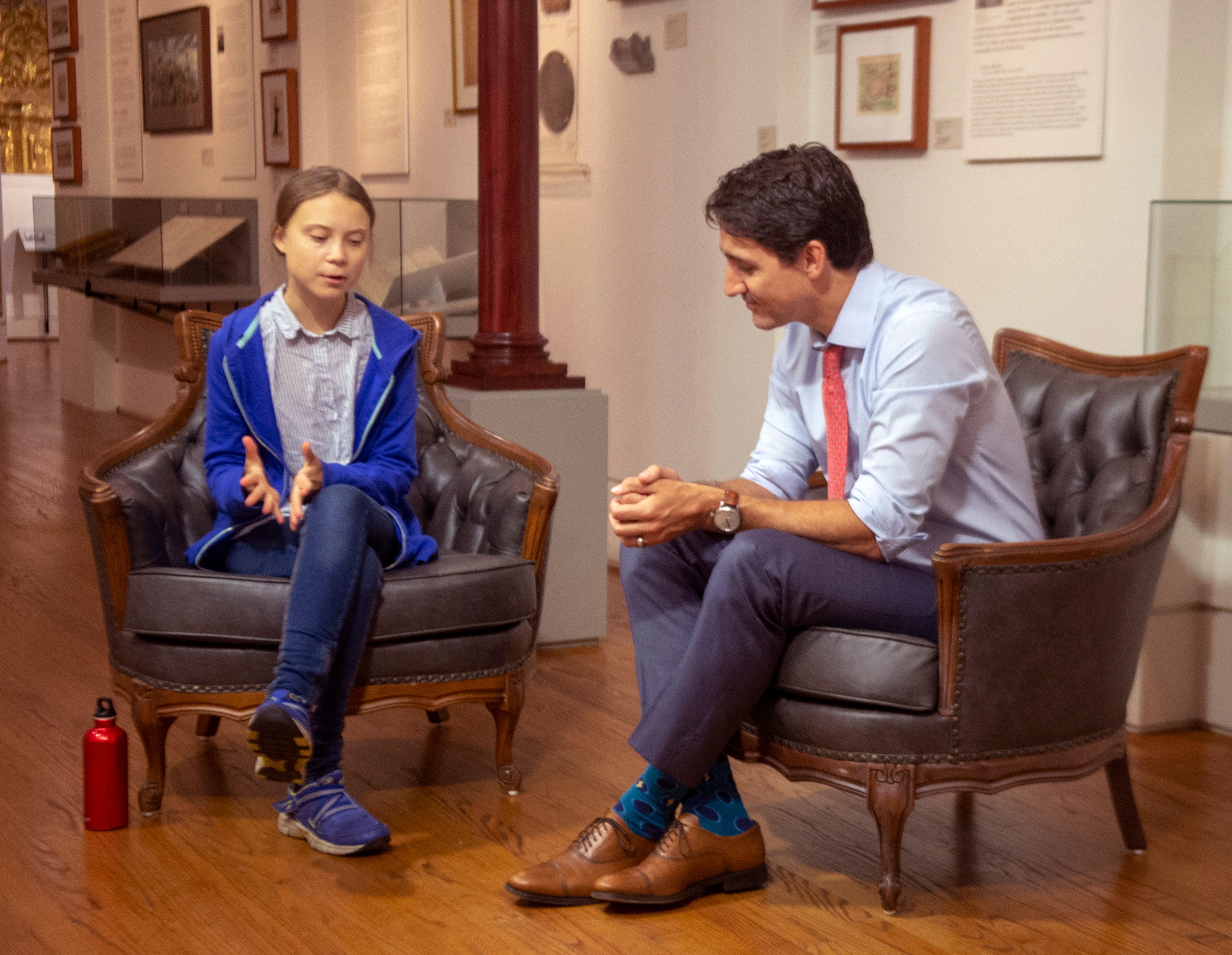 Canadian Prime Minister Justin Trudeau speaks Swedish environmental activist Greta Thunberg in Montreal on Friday, Sept. 27, 2019. Thunberg says she delivered the same message to Trudeau that she gives to all politicians — that he needs to listen to the science and act on it. (Ryan Remiorz/The Canadian Press via AP)

TORONTO  — Swedish teenager Greta Thunberg said Friday she doesn’t understand why grown-ups and world leaders would mock children and teens for acting on science, responding to attacks on her campaign as students conducted a second wave of global protests demanding action on climate change.

When asked about U.S. President Donald Trump and others who have mocked her, the 16-year-old activist said they likely feel their world view and interests are being threatened by climate activism.

“We’ve become too loud for people to handle so people want to silence us,” she said at a rally in Montreal after meeting Canadian Prime Minister Justin Trudeau. “We should also take that as a compliment.”

The youth climate movement has drawn criticism from some who accuse the students of overreacting and say they would be better off going to school. In an apparent sarcastic jibe at Thunberg this week following her haranguing of world leaders, Trump tweeted: “She seems like a very happy young girl looking forward to a bright and wonderful future. So nice to see!”

Instead of addressing Trump by name, she said Friday that she didn’t “understand why grown-ups would choose to mock children and teenagers for just communicating and acting on the science when they could do something good instead.”

Thousands later chanted “Greta! Greta!” as she spoke at an afternoon rally in Montreal.

“We will do everything in our power to stop this crisis from getting worse even if that means skipping school or work,” she said. “The people have spoken. And we will continue to speak until our leaders listen and act. We are the change and change is coming.”

Her comments came as students in Italy symbolically torched a replica of planet Earth, one of many protests as part of the climate strikes sparked by the Swedish teen. Some participants echoed the anger she expressed this week at a U.N. summit in New York.

“How dare you!” read one banner at a rally in Italy’s financial hub of Milan, where tens of thousands took to the streets and later gathered around a giant globe to watch it go up in flames.

More than 100,000 people also rallied in Rome, where protesters held up signs with slogans such as “Change the system, not the climate” or just the word “Future.”

Fears about the impact of global warming on younger generation s drew fresh protests in India, Spain, Portugal, Sweden, Finland, the Netherlands and Bolivia a week after hundreds of thousands rallied worldwide ahead of the U.N. summit.

In New Zealand, students marched on Parliament in Wellington, staging one of the largest protests ever held in that capital.

In Berlin, activists from the Fridays for Future group braved persistent rain to denounce a package of measures that the German government recently agreed on to cut the country’s greenhouse gas emissions.

Experts say the proposal falls far short of what’s needed if the world’s sixth-biggest emitter is to meet the goals of the landmark 2015 Paris climate accord.

Actor Javier Bardem joined dozens of young people in San Sebastian in one of several rallies held across Spain on Friday morning ahead of evening demonstrations in major cities such as Madrid and Barcelona.

Bardem was promoting a documentary he worked on with Greenpeace.
In Austria, organizers said 150,000 people participated, while local APA news agency said the number was 65,000.

In Poland, protesters blocked traffic in downtown Warsaw by chaining themselves to a tent. Police and firefighters tried to negotiate with them.

In Buenos Aires, where school strikes inspired by Thunberg have taken place since March, several thousand people marched from the famed Plaza de Mayo to the Congress. Protests occurred elsewhere in Latin America, including in Chile and Bolivia.

Protesters even rallied on Chile’s Easter Island, known for its massive statues known as moai.
In Canada, Thunberg met Trudeau, who praised her activism on climate change.

“She is the voice of a generation, of young people who are calling on their leaders to do more and do better,” Trudeau said. “And I am listening.”

Trudeau, who is in the middle of an election campaign, announced a plan to plant 2 billion trees over the next decade.

Thunberg, however, indicated that she expects more, even of leaders who welcome the movement. Scientists this week issued new dire warnings about the consequences of rising temperatures on the world’s oceans and cold regions.

Thunberg told a crowd in Montreal it was moving to see people of all generations so passionate for a cause.
“He (Trudeau) is of course obviously not doing enough, but this is just a huge problem, this is a system that is wrong,” she said. “My message to all the politicians is the same: Just listen and act on the science.”/muf