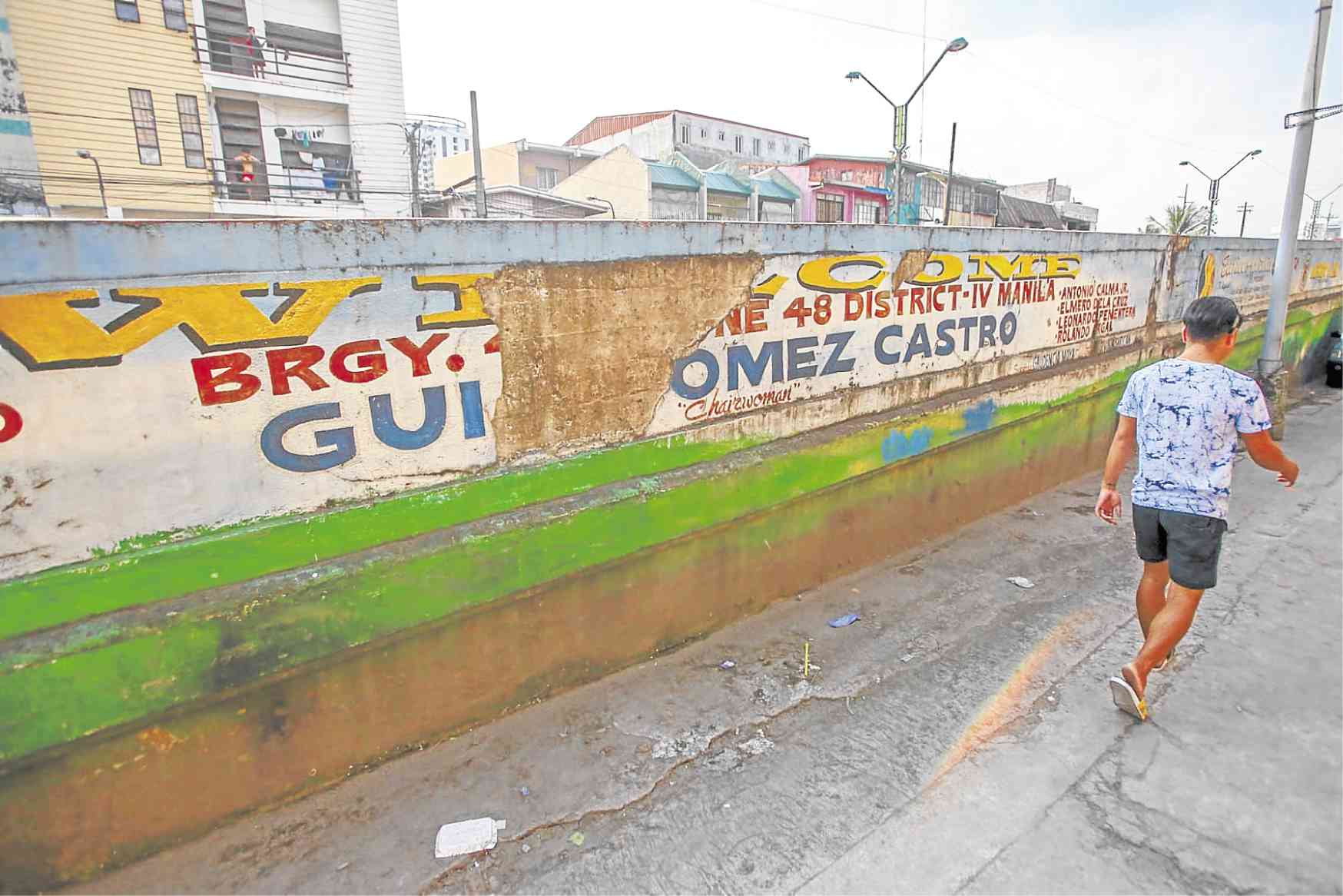 POLITICAL TURF A resident of Barangay 484 in Manila’s Sampaloc district walks past a sign announcing a project of former barangay chair Guia Gomez Castro, who has fled the country after being accused of drug trafficking. —RICHARD A. REYES

There are still three standing arrest warrants against Guia Gomez Castro, the alleged “drug queen” of Manila, and these can be used to extradite the former barangay chair who fled the country after being tipped that she would be arrested.

Police Maj. Gen. Guillermo Eleazar, Metro Manila police chief, cited the warrants on Friday as he denied senators’ claims that the police raised the case of Castro to divert the issue from rogue policemen involved in drug syndicates.

Eleazar said four law enforcement agencies had joined forces to form a task force that would go after drug syndicates and their police protectors.

“All these accomplishments are sidelined by reports of wrongdoing not only by those so-called ninja cops but also of what we describe as narcos in uniform,” the statement read.

“Recent reports of the involvement of rogue policemen in the drug trade did not only affect the morale of the law enforcement agencies running after illegal drug syndicates but also taint once again the earnest efforts of the President to solve this drug menace,” it added.

The task force’s first objective, Eleazar said, is to build the case against Castro, who was allegedly protected by at least 16 officers who had stolen drugs seized from raids and later sold by Castro and her syndicate.

Eleazar again released a diagram of a drug network coddled by the 16 ninja cops, said to be led by a police senior master sergeant who is now retired.

Castro was  allegedly connected to this network through a brother, a dismissed patrolman.

Eleazar said nine of the 16 ninja cops were already dead while one, whom he identified as Police Cpl. Jolly Aliangan, is detained on drug charges. The rest are retired, dismissed or absent without leave.

The diagram, which Eleazar said was based on several police operations over several years, also included several civilians who allegedly helped Castro operate her syndicate.

At least 70 other detained suspects are believed to be part of Castro’s syndicate but Eleazar declined to identify them because no charges have been filed against them yet.

“We felt it was safe to name [some of them] because at least we have filed cases against them,” he said.

Eleazar denied that the Castro case was being used as a diversion from the issue of rogue policemen, saying authorities have been going after her for years.

“We have always been on the lookout for this woman and our operations’ timeline [will] show that we have been after her from 2015 to 2018,” he said.

Were it not for Aaron Aquino, the PDEA chief, who identified her in a Senate hearing, information about Castro would not have surfaced but the revelation of the intelligence data could also help take down syndicates involving rogue policemen, he said.

“We are trying to make the world smaller for ninja cops,” Eleazar said. “By identifying them, it would make it harder for them to be reassigned to drug enforcement units. We are reducing the window of opportunity against these cops.”

He played down fears that the disclosure of information about Castro would make it harder to arrest her or dismantle her network.

“They don’t necessarily have to be kept [secret], and, even if she doesn’t come back, as long as we neutralize her accomplices, then her network is effectively useless,” Eleazar added.

Castro, a former chair of Barangay 484 in Manila’s Sampaloc district, is accused of leading a syndicate that recycled drugs that were seized during police operations.

Earlier this week, the Bureau of Immigration said she fled to Bangkok on Sept. 21 after being tipped that lawmen were on her trail.

But Eleazar played down Castro’s escape, saying the police had three valid arrest orders against her and that these could be used to have her extradited from Thailand.

Two of the arrest warrants were issued by a Quezon City court on March 14, 2003, and June 6, 2011, over charges arising from the issuance of bouncing checks.

Another warrant, issued on March 1, 2002, was for a  drug-related case, said Eleazar.

On Thursday, the Manila police arrested a barangay official who was allegedly caught with four  sachets of “shabu” (crystal meth) in a drug sting.

Diana Guiao, 53, a councilor of Barangay 537 in Sampaloc, Manila, was arrested along with Benjamin Velasquez, 31, by the antidrug unit of Manila Police District’s Station 4.

The arrest prompted Manila Mayor Francisco “Isko Moreno” Domagoso to reiterate that drug pushers should “stop or stay away from Manila.”

“[Whether you are a] chairman, barangay official or ‘kagawad’ … just stop. We are relentless in our campaign against illegal drugs,” he said. —WITH A REPORT FROM MEG ADONIS