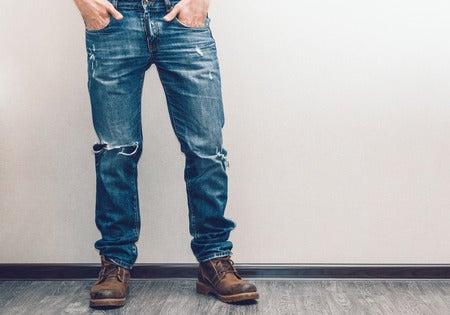 A man voluntarily pulled down his pants to show he was not hiding anything in them. Image: INQUIRER.net stock photo

A man in the United Kingdom showed his penis to security to prove that he did not steal from a clothing store.

Steve Whitehurst, 47, was at men’s clothing store Scotts Menswear on Sunday, Sept. 22, when a manager accused him of hiding something in his pants, The Sun reported on Wednesday, Sept. 25. Whitehurst was with his girlfriend Mandy Shenton and her 18-month-old grandchild.

He said he was paying for £400 (P25,000) worth of items at the cashier and was stopped from leaving because of something in his pants.

“I had very tight jeans on that day and there was a bulge, yes, but that’s not illegal. I can’t help the way I’m made,” he explained.

Whitehurst said that as the manager argued with him, he dropped his pants to show he had “nothing to hide” in his boxers.

According to him, the manager remained unconvinced, so he volunteered to go into a fitting room to show a male security guard he had nothing in his pants.

He told Stoke-on-Trent Live today, Sept. 27, that he was blocked from leaving and was only allowed to go when he asked for a refund.

Whitehurst admitted to losing his cool toward the end of the ordeal and calling the manager a “b*tch,” but said he was not aggressive beforehand.

The next morning, he spoke to security about the incident and demanded an apology. ”I felt like I was a little man, be it one with a large penis, against this big corporate company. It’s so frustrating.”

A source told The Sun that there was reason to suspect Whitehurst of shoplifting—he would pick up and drop items, and a missing electronic tag was found in a jacket that he fit. When he was confronted, he was “aggressive.”

The source also noted that despite Whitehurst’s claims of being well-endowed, “the bulge was much smaller than staff remembered it.”

JD Sports, which owns Scotts Menswear, said in a statement, “The customer in question was exhibiting suspicious behaviour and, when the store manager confronted the customer, he became abusive.”

“At no point did any colleague ask the customer to remove any clothing.”

A spokesperson from the shopping center Intu Potteries, where the store is located, said Whitehurst has accepted its apology.  Niña V. Guno /ra

Penis size isn’t a personality trait, stop bragging about it