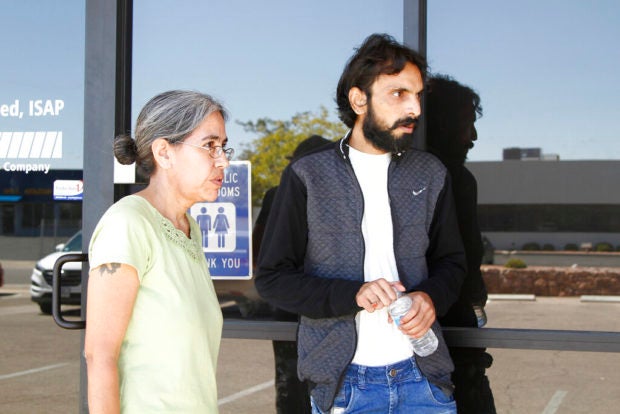 Ajay Kumar, right, walks with Margaret Brown Vega, of Las Cruces, New Mexico, his immigration sponsor and a volunteer with Advocate Visitors with Immigration Detention, after being released on bond from Immigrations and Customs Enforcement in El Paso, Texas, Thursday, Sept. 26, 2019. Kumar went on a hunger strike for more than 70 days in July to protest his detention since August of 2018, enduring painful forced feeding through a tube in his nose. Kumar, from India, was initially denied an application for political asylum and ordered deported and is appealing the ruling. (AP Photo/Cedar Attanasio)

EL PASO, Texas — An Indian immigrant who lost a third of his weight during a 70-day hunger strike over the rejection of his asylum claim won temporary release Thursday after a year in U.S. detention.

Ajay Kumar, 33, bowed with his hands clasped together in a traditional Indian greeting as he walked away from a detainee processing center in El Paso, Texas, with a tracking device around his ankle — a condition of his release. He was accompanied by human rights activists, who had been galvanized by medical personnel force-feeding him. The painful procedure involves pumping liquid food into the stomach via a tube through his nose.

Immigration and Customs Enforcement officials agreed to a deal last week in which Kumar and another Indian national resumed eating on a promise that they would be released, according to their lawyers. The men began eating again Saturday and had been kept under medical observation.

“I got my freedom,” Kumar said. “I’ve been waiting a long time for this.”

Kumar and fellow Indian detainee Gurjant Singh began their hunger strike July 8 after rejection of their asylum claims and denial of bond. They had spent almost a year in an ICE detention facility in Otero, New Mexico, and hadn’t been charged with a crime. They believe the judge did not consider the facts of their cases individually.

“This immigration judge said, ‘All of these Indian asylum claims are incredulous. I don’t believe them,'” said attorney Linda Corchado, who represents Kumar, in a press conference last week. “It is damning. You expect at least some level of weighing the facts.”

Singh has not been released but his attorney, Jessica Miles, said she hopes it will be Friday.

Kumar told immigration officials he fled India because he feared beatings, torture and death at the hands of Prime Minister Narendra Modi’s ruling Bharatiya Janta Party. He said he was attacked twice by BJP members for his work promoting the opposition Indian National Lok Dal party, including a beating that had him bedridden for more than a month, according to a doctor’s note included in his asylum application.

A few weeks into their hunger strike, Kumar and Singh were transferred from the Otero facility to the El Paso Detention Center, with a medical wing that has become a hub for force-feeding hunger strikers in ICE custody. At the time, a weak and gaunt Kumar told The Associated Press he would rather starve to death in custody than be deported back to India.

Days later, Kumar and Singh were forced to hydrate through IV drips . By mid-August, they were being force-fed. A recently filed court document shows Kumar missed 220 meals.

ICE declined to comment on their release, or to give an account of how many detainees are currently on hunger strike in Otero and El Paso.

The agency is required to monitor Kumar and Singh’s health due to a court order that admonished ICE for the detainees’ substandard medical care.

U.S. District Court Judge Frank Montalvo reluctantly granted permission to force-feed — a practice rejected by global human rights groups and medical ethics guidelines — saying he had no other choice or the men would die.

“In this case, Respondent (Kumar) is facing too great a risk of organ failure, muscle atrophy, and death,” Montalvo wrote in a Sept. 12th order authorizing force-feeding.

Montalvo’s order also said ICE’s duty is not just to “keep the Respondent (Kumar) alive” and that the agency should take hunger-strikers to an independent doctor before asking for a court order.

Kumar will live with a human rights advocate in Las Cruces, New Mexico while he regains weight and appeals his asylum case.

Their sponsor, Margaret Brown Vega, is a volunteer with Advocate Visitors with Immigration Detention, a group that helped Kumar secure a lawyer and pushed for his release. She said she wished ICE had released Kumar sooner, and said she was still holding her breath for Singh to be released.

“This is a decision that has always been at ICE’s discretion,” she said. “They could have decided to do this long ago. Why they waited this long — I don’t know.” /jpv