In search of glory, Yemen athlete drowns in Med trying to reach Europe 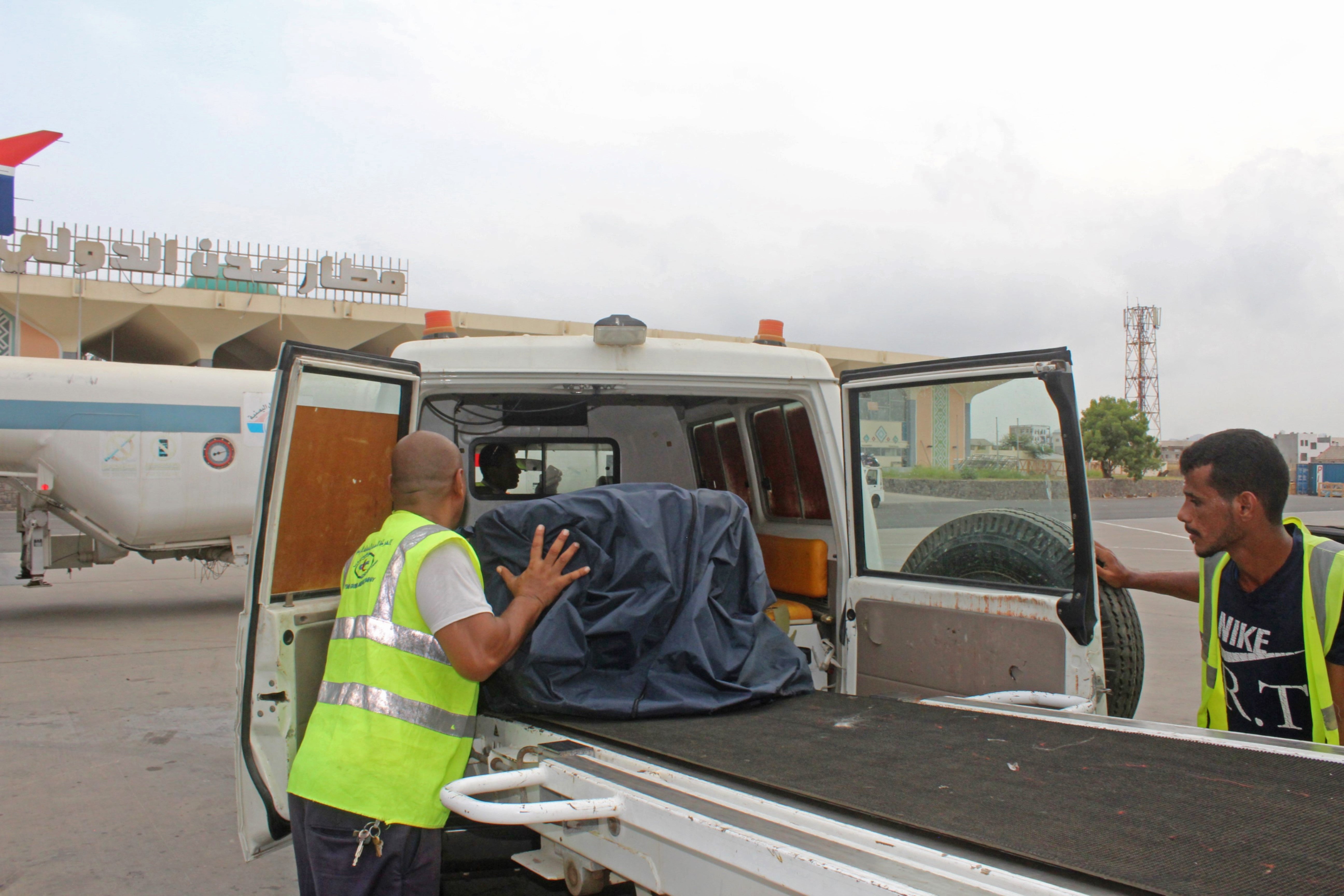 Workers load onto an ambulance the body of Yemeni Kung Fu champion Hilal al-Haj, who drowned in the Mediterranean, upon its arrival at Aden International Airport in Yemen’s second city of Aden on September 26, 2019. – The 25-year-old athlete drowned in the Mediterranean after being swept away as he attempted to swim from Morocco to the Spanish enclave of Melilla last week. His family in Yemen’s rebel-held capital Sanaa was expected on Friday to bury the 2011 Yemen Kung Fu champion, who had won a series of medals from Asian and Arab championships. (Photo by Saleh Al-OBEIDI / AFP)

DUBAI, United Arab Emirates — Slim and with a tight-trimmed beard, Yemeni Kung Fu champion Hilal al-Haj dreamed of finding athletic glory in Europe, but a risky sea journey to get there ended in tragedy.

The 25-year-old athlete drowned in the Mediterranean after being swept away as he attempted to swim from Morocco to the Spanish enclave of Melilla last week.

His family in Yemen’s rebel-held capital Sanaa was expected on Friday to bury the 2011 Yemen Kung Fu champion, who had also racked up a series of medals from Asian and Arab championships.

“He was looking for a country that would appreciate his talent and recognize his value as a human being and athlete,” his older brother Saeed said.

“He loved life, he detested war,” he told AFP by phone.

Saeed saw his brother just hours before he headed to Morocco, where on September 16 he attempted the dangerous swim to the Spanish enclave.

The athlete was proud of his heritage, his brother said, but competing in a country pushed to the brink of famine by a years-long war between the government and rebels had brought challenges.

Yemen was rife with “contempt” and “injustice”, Saeed said, adding his brother was treated unfairly by the Huthi rebels who took over the capital in 2014 despite taking no side in Yemen’s conflict.

After returning to Sanaa from a championship in Azerbaijan, where Haj won third place representing Yemen, he expected to be celebrated by rebels.

“The answer was painful. They told him that no one had asked of him to raise the flag of Yemen,” Saeed said.

Years of war have made leaving and entering Yemen nearly impossible, but Haj faced even greater difficulties when attempting to cross over the heavily fortified land barrier surrounding Melilla, on the northern coast of Morocco.

After two months of failed attempts, he decided to swim for it, his brother said.

“It was a short distance. People before him have tried and succeeded,” he told AFP.

“My brother was athletic, it seemed like it would be easy, but tragedy struck and he was swept away by a powerful wave.”

A friend accompanying Haj on the swim who managed to make it safely to the Spanish enclave said the journey was “extremely difficult”.

“The waves were so high,” the friend, who asked to remain anonymous, told AFP.

“When (Haj) screamed, I thought it was because he was tired. I didn’t know he was drowning.”

Haj’s body was recovered and flown into Yemen’s southern city of Aden on Thursday. It was expected to be carried on to the capital in an ambulance, Saeed said.

Sanaa airport has been under blockade since 2017 by a Saudi-led military coalition backing the government against the Iran-aligned Huthis.

Haj’s father and younger brother are expected to arrive from Saudi Arabia to attend the funeral.

“He always said that we can’t reach our sports goals by staying in Yemen,” Haj’s friend Jamal el-Sabri told AFP.

“The failure of the sports institutions, corruption and nepotism destroy sports and talent. The more time passes, life is becoming more difficult and our ambitions are dying.”  /muf