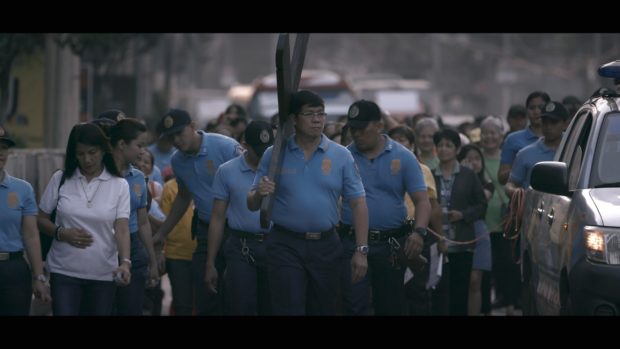 MANILA, Philippines — A British filmmaker is urging President Rodrigo Duterte and his supporters to watch his documentary on the war on drugs before dismissing it as mere ‘black propaganda’.

James Jones said his team did not come to the Philippines with a biased notion of the Duterte administration’s drug war, contrary to recent statements by Presidential Spokesperson Salvador Panelo that the film “On the President’s Orders” ‘reeks of malice’.

“So the last question relates to President Duterte’s administration’s response this week, when the spokesman came out and described the film as black propaganda which reeks of malice, despite not having seen the film,” Jones said in a prepared video which was shown to reporters after a private screening on Wednesday night.

“You know it’s not entirely unexpected if you make a film about the drug war and you’re a foreign journalist, it comes with a territory, I suppose.  But all I would say is that we didn’t come with a particular agenda,” he added.

Jones asked the President’s sympathizers to try spending some time to study the documentary and eventually understand that the people being killed also have families and that their families grieve over their deaths.

“So you know, I urge people in the administration and Duterte supporters at home and abroad to watch the film, to engage in debate, and to understand you know that the people who are dying do have families too. Hopefully they could watch and understand that it’s a complicated issue, even if you support the drug war,” he added.

“One thing that the police said to us repeatedly was ‘you understand these drug pushers are not like you and I, they’re not humans, they’re animals.’  Well you know we filmed with their families, and whatever these people were, these were not big drug dealers and certainly were human and had people who loved them,” he noted,” he noted

In the documentary film, the sides of the police officers conducting the drug war and the grievances of the relatives of the bloody campaign’s victims were laid out side by side.

Caloocan City, one of the hotspots of the police campaign against illegal drugs, was placed on the spotlight following vigilante-style killings allegedly perpetrated by police officers themselves.

Police officials have repeatedly denied such “off-the-job” operations of their personnel.

The film was first shown locally in a private screening at the University of the Philippines’ Cine Adarna last Friday.

It was also shown in London — where Jones said several Filipinos supportive of President Duterte protested outside the cinema halls.

“We wanted to film with the police and if anything, they condemned themselves with their own words and actions, it’s not us putting our own interpretation on these things,” Jones said.

Panelo, however, last September 17 said that the film contains a lot of disinformation about the drug war.

“The Palace is vexed by the continuous spread of disinformation against our country’s campaign against illegal drugs and criminality,” Panelo said in his statement.

“Foreign audiences have been saturated with false and baseless narratives relative to the Philippine government’s anti-narcotics approach, specifically on the nature and number of deaths arising from police operations against it,” he added.

READ: Palace blasts US docufilm on Duterte as ‘derogatory, biased’

Jones though insisted that the official government numbers, which claim that more than 5,000 individuals have been killed under the government’s anti-drug drive, is already worth probing as it is.

“By any standards, that is a phenomenon that’s worth serious journalistic investigation, and I think that’s what we did.  Our objective was to get to the truth and to try and understand why these killings are happening, and how they could be justified,” he explained./gsg, je