MANILA, Philippines — Fire hit Fisher Mall on Quezon Avenue in Barangay Santa Cruz in Quezon City at around 11:30 p.m. on Wednesday, according to a Twitter alert posted by TXT Fire Philippines.

At 11: 38 p.m., the group tweeted that the third alarm had been raised over the fire.

The fire started in the storage area of the mall supermarket, according to a report by Radyo Inquirer. 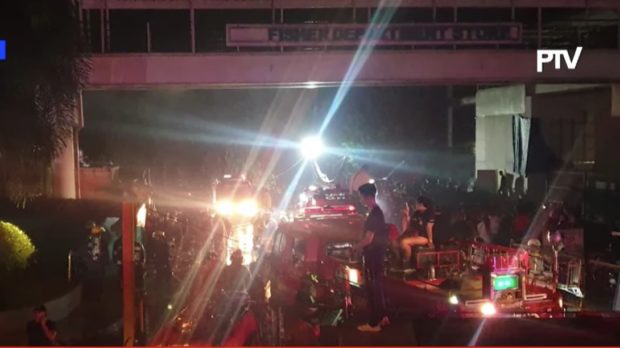 A security guard told authorities that a transformer at the back of the mall exploded.

Meanwhile, a female firefighter reportedly passed out and had to be taken out of the mall on a stretcher.

According to later tweets by TXT Fire Philippines, the fire was put under control at 12:32 a.m., Thursday, and was declared out at 12:43 a.m.

Fire trucks occupied the westbound lane of Quezon Avenue in front of the mall.

Authorities enforced a traffic rerouting and advised motorists to avoid passing through that area.