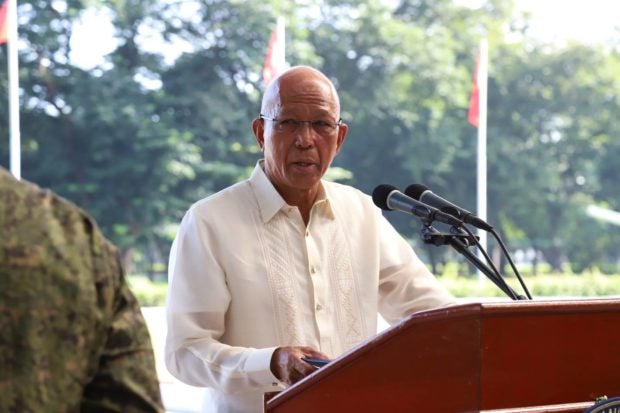 MANILA, Philippines — Defense Secretary Delfin Lorenzana is considering seeking an exemption from President Duterte’s order to suspend loan and grant deals with 18 countries that backed a resolution for a probe in the Philippine government’s alleged human rights abuses.

Lorenzana initially broached the idea at an interview on Monday during the blessing of the Marine Corps’ new amphibious assault vehicles where he assured reporters he would comply with the directive.

But he pointed out that he might seek an exemption for loans pertaining to defense contracts.

At a forum of the Association for Philippine-China Understanding in Mandaluyong City on Tuesday, the defense secretary reiterated his position to abide by Mr. Duterte’s directive.
Purchases from Australia

“Maybe we are going to request for exemptions because we really need to transact business with another country,” Lorenzana said.

He raised the possibility that purchases would not be covered by the President’s order, as he pointed out that the Department of National Defense is in the process of talking with Australia for the acquisition of six new offshore patrol vessels.

Australia is among 18 countries that voted in favor of a July 11 United Nations Human Rights Council resolution, introduced by Iceland, for a comprehensive written report on the human rights situation in the Philippines.

An Aug. 27 memorandum from the Office of the President, signed by Executive Secretary Salvador Medialdea, ordered a suspension of all negotiations or signing of loan and grant agreements with the countries which voted in favor of the UNHRC resolution to express the Philippine government’s strong rejection of the measure.

“I will talk again to higher ups on how we can go around the directive of the President but we will follow the directive,” the defense secretary said.

The rejection of new loans and grants from countries backing a probe of the war on illegal drugs is a “political statement” with no negative impact on Manila’s bilateral ties with these 18 nations, said presidential spokesperson Salvador Panelo.

“It is a political statement. You don’t mess with this country with that kind of resolution,” Panelo said on Tuesday.

“I do not see any adverse effect. There are no movements on the part of the 18 countries who favored [the Iceland resolution]. In fact, I do not hear any reaction from them. The ones reacting are the critics,” Panelo said.

He said the Philippines’ bilateral relations with these countries are not confined to financial aid alone.

The Palace official also likened the situation to the Philippines’ ties with China, which continue to progress despite the sea row.