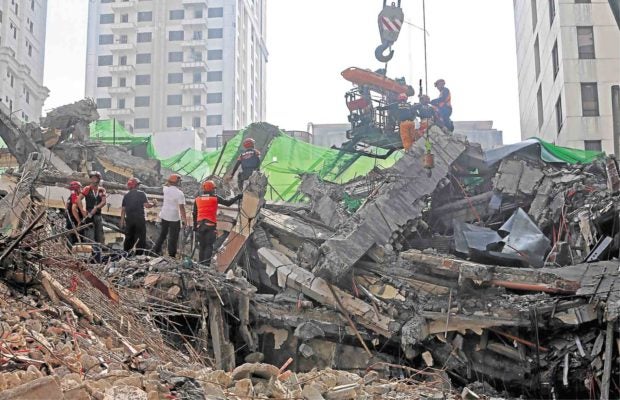 LOUD CRASH The Hotel Sogo on Mabini Street in Manila lies in rubble after collapsing while being demolished on Monday morning. —EDWIN BACASMAS

MANILA, Philippines — President Rodrigo Duterte has ordered a thorough investigation of the botched demolition of a budget hotel in Malate, Manila, that left two laborers dead and one hurt, officials said on Tuesday.

Wasting no time, Manila Mayor Francisco “Isko Moreno” Domagoso tasked the City Engineering Office to investigate which entity should be held liable for the collapse of a part of Sogo Hotel.

Armando Andres, the city chief engineer, was given three days to submit a report on the incident.

“Now that the [retrieval operations] are over, it’s time for the government to investigate if there is negligence on the part of Sogo or the private contractor or the city government of Manila,” the mayor told the Inquirer in an interview.

On the heels of the collapse, the President ordered a “thorough investigation” in coordination with the city government, presidential spokesperson Salvador Panelo said in a statement.

A portion of the hotel on Mabini Street collapsed on Monday while it was being demolished, crushing laborers Melo Ison and Jerome Fabello to death. Ison’s brother was injured. Nineteen others who were part of the demolition crew were safe.

The building had been closed for a year, according to a hotel statement issued on Monday night.

“There were no guests and employees at the time the building collapsed,” it said.

Blame it on Dole, city gov’t

The city government will be inspecting structures in the city that are up for demolition, officials said.

Meanwhile, the Trade Union Congress of the Philippines (TUCP) blamed the city government and the Department of Labor and Employment (DOLE) for the deaths of the laborers.

The deaths could have been prevented had the city government and the DOLE made surprise visits and inspections of buildings to check compliance with standards spelled out in construction or demolition permits, TUCP president Raymond Mendoza said.

“This [incident] shows the repeating cycle of how city hall building permit officials and the labor department regional officers are negligent in conducting onsite inspections and worksite visits before or after issuing building and demolition permits to building owners and contractors,” he said in a statement.

Without such inspections, contractors sacrifice the safety of their workers to ensure the projects are completed as soon as possible, he said. —With a report from Julie Aurelio