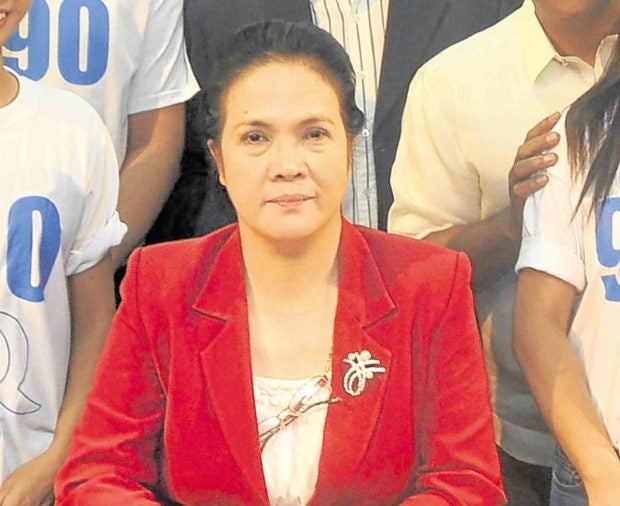 MANILA, Philippines — Chief Public Attorney Persida Acosta is bristling at repeatedly being blamed for the reemergence of infectious diseases in the country and her voice can almost be heard in social media.

“Trolls are out using [the Department of Health’s] alleged outbreaks!” Acosta posted on Twitter on Saturday, two days after the DOH announced the reemergence of polio in the country after almost two decades. Creators of social media memes immediately went to work, one of them “congratulating” her for “reviving” the debilitating disease.

Acosta said she and her coworkers at the Public Attorney’s Office (PAO) were inoculated with proven vaccines at childhood and her “only issue” was with the dengue vaccine Dengvaxia.

Drug companies and some doctors, including DOH officials, have been blaming Acosta for the declining public confidence in the government’s immunization program following the death of 145 people, mostly children, who were inoculated with Dengvaxia.

After the PAO filed criminal cases against health officials and drug companies in early 2018, she has also been blamed for the surge in measles cases in six out of the country’s 17 regions earlier this year.

When the DOH announced last week that it had found two cases of poliomyelitis, she was again blamed for the return of a disease that was declared eradicated in the country 19 years ago.

But Acosta said the DOH should take responsibility for the two outbreaks because of the vaccines it used and the poor information drive for its immunization program.

She said the two children — one 3-year-old and one 5-year-old — who were found stricken with polio should have been inoculated when they were 2-6 months old, at least three years ago.

On Friday, World Health Organization (WHO) Philippines representative Rabindra Abeyasinghe clarified that the vaccines previously used by the DOH were not meant for the Type 2 polio virus strain that was found in the two new cases.

Consequently, the DOH will rollout a vaccine specifically targeting the Type 2 strain, in addition to a supplemental polio immunization program.

Health Undersecretary Myrna Cabotaje said they were awaiting the delivery in the first week of October of the monovalent vaccine that would come from the WHO headquarters in Geneva, where it has been stockpiled in the event of an outbreak.

Cabotaje said Lanao del Sur, Cavite and Davao will be prioritized in the distribution of the vaccine as these were the areas where the Type 2 strain was recorded.

In the case of Manila, the Type 1 VDPV strain was detected in two tests conducted on the city’s sewage.

Cabotaje said that even if a child below 5 years old had already completed his polio vaccination, he or she would still be given the vaccine “for added protection.”

“That is what the other countries are doing until there are no more recorded cases,” she said. “What’s important [with the distribution of the] monovalent vaccine is to cover everyone. We don’t want anyone to be left behind in an area, so that the virus would not be able to mutate.”

Since April 2016, governments around the world have switched from the trivalent to bivalent OPV because, according to the Global Polio Eradication Initiative (GPEI), continuously using the trivalent OPV increases the risk of circulating the Type 2 strain.

In 1999, the wild or naturally occurring Type 2 strain was declared eradicated. But up until 2015, 90 percent of VDPV cases were linked to the Type 2 strain.

Cabotaje said that apart from supplemental immunization programs, the DOH will also intensify its surveillance mechanisms since it was possible that it missed acute flaccid paralysis (AFP) cases.

Based on latest DOH data, AFP surveillance declined significantly between 2017 and 2018.

Ideally, countries without poliovirus transmission should have an AFP reporting rate of 1 per 100,000 children below 15 years old.

This was way below the 1.38 reporting rate recorded in 2011, when the Philippines was also deemed at high risk of polio reemerging.

The DOH said that a decreasing AFP rate means “we may not be able to find true cases of polio and may experience resurgence of polio cases.”

Because of the VDPV outbreak, the WHO has recommended that travelers to the polio-affected areas be fully vaccinated against polio.

It noted that tourists staying for more than four weeks “should receive an additional dose of OPV or inactivated polio vaccine within 4 weeks to 12 months of travel.”