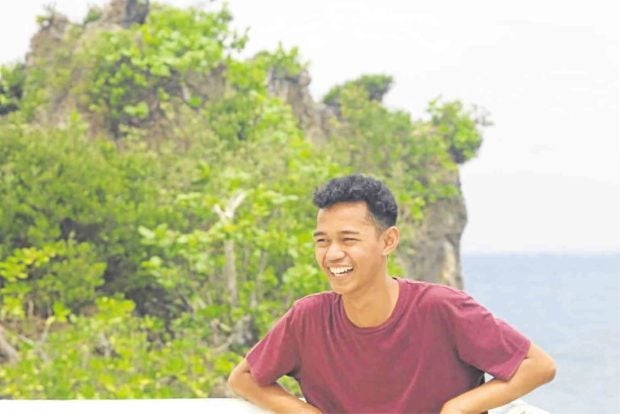 FROM A LOVING SON His family’s decision made Kobe Andrei Tejero—who died in a motorcycle crash last month at age 17—the first eye donor from Eastern Visayas (Region 8), according to Eye Bank Foundation of the Philippines. —Contributed

TACLOBAN CITY, Leyte, Philippines — He was supposed to meet his friends when he crashed his motorcycle to avoid hitting a dog that suddenly crossed the street in Borongan City, Eastern Samar.

Kobe Andrei Tejero was brought to a hospital in this provincial capital where he died five days later on Aug. 20 due to severe head injuries. He was only 17.

The death of the Grade 12 senior high school student of  Eastern Samar National Comprehensive High School came as a shock to his friends and loved ones.

But his parents, Mariso and Wilfred, decided to donate his organs so that their eldest son may live through others.

“When we decided to donate his eyes and his other organs, I whispered to him that he would be doing some good [for other people],” said Mariso, 47, a computer teacher at Eastern Samar State University in Borongan.

A first in Region 8

With his parents’ consent, Tejero became the first eye donor from Region 8 (Eastern Visayas), according to Eye Bank Foundation of the Philippines (EBFP). The region is composed of the provinces of Leyte, Southern Leyte, Biliran, Samar, Eastern Samar and Northern Samar.

The family wanted to donate Tejero’s heart and kidneys but his kidneys malfunctioned when the teenager suffered cardiac arrest while confined at Eastern Visayas Regional Medical Center (EVRMC).

Eventually, only his corneas were harvested for donation, according to Mariso.

On Aug. 15, Tejero was on a motorcycle heading to Maydolong town from Borongan when the bike crashed as he tried to avoid a dog crossing the street.

He was brought to EVRMC for severe head injuries and died five days later.

While watching over the teenager in the hospital, a member of the hospital’s staff approached the Tejero family and asked if they were willing to donate his organs in the event he did not survive.

Mariso, husband Wilfred, their other son, 13-year-old Brian Emmanuel, and other family members discussed the matter.

“We prayed about it. And we came to a decision to donate his organs. We consoled ourselves [with the thought] that if we were to donate Kobe’s organs, somebody out there would benefit and we could help extend his or her life. My husband, and later, our relatives agreed with me,” Mariso said.

“He was a very loving and helpful son. I knew he was also happy that we donated his [corneas] to help others who were in need,” she added.

No fear or sadness

The mother recalled that while she was pregnant with Tejero, she was lucky to find a blood donor when she was looking for one.

Just hours after the teenager’s death, a team of doctors from Chong Hua Hospital in Cebu City went to EVRMC to harvest his corneas. The procedure took less than an hour.

Mariso said the doctors showed them Tejero’s corneas inside a specialized small jar. “We were just happy to see Kobe’s corneas. There [was] no fear or sadness. We kept on saying ‘Hi Kobe,’” she said.

The corneas were brought to the EBFP office in Ermita, Manila.

Yna Orfinada, EBFP senior procurement transplant coordinator, said the foundation was happy with the Tejero family’s decision as this made the teenager the first eye donor from Region 8.

“We hope that this will encourage others to become organ donors,” she said in a phone interview.

Orfinada said about 450 persons had been waiting for donations of corneas but only 30 had been listed as donors. “We have already identified a beneficiary of Kobe’s corneas,” she said.

Told that Mariso would like to see the recipient of her son’s corneas, Orfinada explained that confidentiality may be waived if the beneficiary would also wish to meet the donor’s family.

Mariso said the experience had moved her to become an advocate of organ donation so others in need could benefit from the procedure. The outpouring of support even from strangers convinced her that she made the right decision.

Among those who supported the family decision was Tejero’s girlfriend, Luzel Antonette Hernane.

“I’m sure he, too, would agree to have his corneas donated to somebody. He was just a loving and caring person,” Hernane said in a message to the Inquirer.

Orfinada said the lack of awareness about the advantages of organ donation, personal beliefs and religious considerations were just some of the factors why only a few people have been willing to donate their organs.

“We will have to strengthen our campaign on organ donation in the country, and we are thankful to Kobe and his family because this will help in our campaign,” she said.