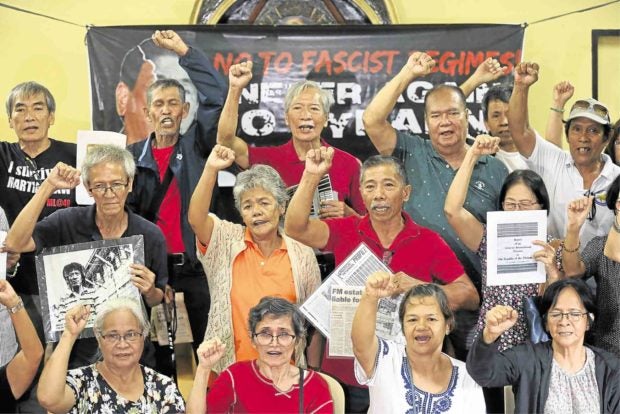 MEMORABILIA Human rights advocates show memorabilia of their detention during martial law on the 47th anniversary of its declaration by the late dictator Ferdinand Marcos. —NIÑO JESUS ORBETA

MANILA, Philippines — The commemoration of the martial law declaration this year is all the more significant because the country continues to face various abuses under an “administration that idolizes [Ferdinand] Marcos,” according to Sen. Leila de Lima.

De Lima called on Filipinos not to forget the abuses that happened during the martial law regime under the late dictator and to resist attempts to whitewash history, especially when similar abuses are happening now.

“Now, what prevails are the terror and darkness brought by the violence and abuses of an administration that idolizes Marcos,” De Lima said in a statement.

According to De Lima, Filipinos must always take time to remember what happened during martial law, declared 47 years ago, even if the memories are not pleasant.

If this is not done, the next generation might forget the atrocities and allow these to happen once more, she said.

At the same time, they must fight attempts to revise what happened in the past, she said.

A bloodless people power revolt in February 1986 ousted  the Marcoses, who fled into exile in Hawaii.

Marcoses back in power

They have since been allowed to return to the country and have made a political comeback.

Sen. Panfilo Lacson said the intention of martial law was a good one, at least at the start.

But it all went wrong after six months, Lacson said.

“Everything that followed was wrong. Greed and abuse took over. Since 1986, it has been the same all over again. When will we ever learn?” he said.

Recently, the  student councils  of the University of the Philippines Diliman and Mapua University signed a resolution declaring the Marcos family as persona non grata, in a bid to declare their campuses off-limits to the Marcoses. Their presence on campus, they argued, “endangered students’ lives and freedoms.”

Banning the Marcoses from entering UP Diliman and Mapua  is “nothing short of just,” considering how they pillaged the country for years, said  martial law activist Bonifacio Ilagan.

The progressive filmmaker and playwright, however,  said the Marcoses should be banned “not just in UP and Mapua but in other campuses as well.”

The Marcoses remain entrenched in Philippine politics by maintaining power in their stronghold Ilocos.

“Imagine, in 1986, they were kicked out of Malacañang. That was the severity of their crimes. It was only through colluding with the powers that be that they were able to worm their way back into power,” Ilagan said. —With a report from Krixia Subingsubing