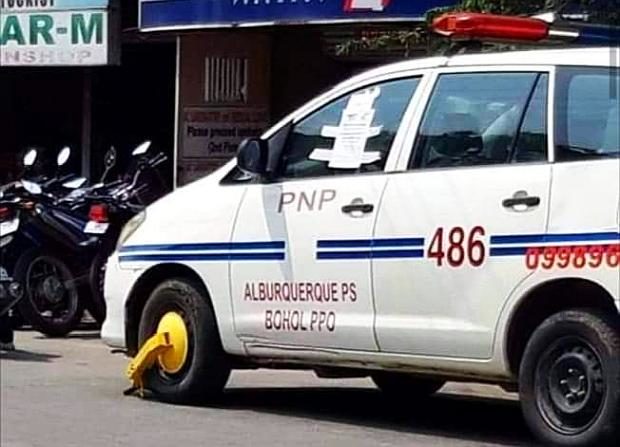 TAGBILARAN CITY, Bohol, Philippines — Col. Jonathan Cabal, chief of the Bohol Provincial Police Office, is disappointed over the clamping of a patrol car by traffic enforcers in this city.

In a statement issued on Saturday, Cabal said the enforcers made it appear that officers of the Alburquerque Municipal Police Office violated traffic laws when they parked a patrol car on the roadside near the Gov. Celestino Gallares Memorial Hospital in this city at 9:30 a.m. last Monday, Sept.16.

Cabal said the police officers took Samuel Caldino and his wife, Olympia, from Oslob town in Cebu to the hospital after they were found floating for two days in the waters off Alburquerque following an accident.

“The clamping was done in a bad light, making the police violators of traffic rules despite assisting the injured,” Cabal said.

He pointed out that the officers didn’t intend to violate the law or abuse their authority.

“They were only performing one of their regular functions at that time, and that is to ensure that the needs of the rescued couple are being met. Lest we forget, the PNP [Philippine National Police] is here not only to protect but also to serve,” Cabal said.

The Tagbilaran City administrator, Cathelyn Torremocha, explained that the traffic officers were just implementing a city ordinance against roadside parking.

“It was not our intention to inconvenience the police officers,” she said in a letter addressed to Cabal on Sept. 20.

She said the traffic enforcers were not informed of the situation despite efforts to locate the driver of the patrol car.

Torremocha said, however, that the city would refund the clamping fee.

The photo of the clamped Alburquerque police car parked on the roadside of the hospital near the Gov. Celestino Gallares Memorial Hospital had gone viral.

The clamp was removed after the police officers paid the fine.