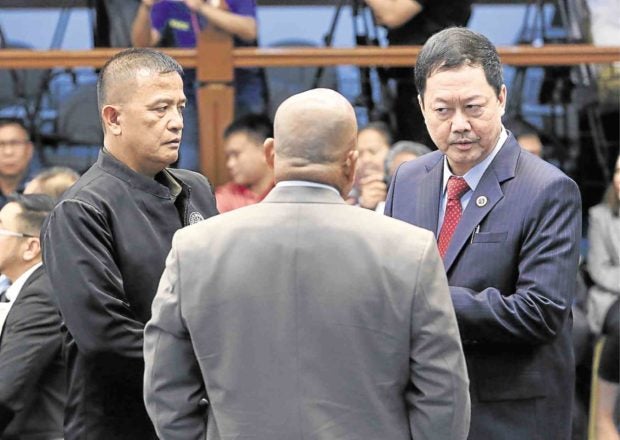 “We find it prudent to pause for a while, tally the count and make sure those who surrendered are those on the list . . . We want to make sure that those remaining [in the list] are actually people that need to be arrested” — Justice Secretary Menardo Guevarra

MANILA, Philippines — The Department of Justice (DOJ) has asked Malacañang to suspend President Rodrigo Duterte’s order to rearrest the heinous crime convicts who were mistakenly freed for good conduct.

Justice Secretary Menardo Guevarra called up Malacañang and Interior Secretary Eduardo Año early Friday to halt the pursuit of the convicts, after it turned out that surrenderers who had heeded the President’s Sept. 19 deadline outnumbered the official number of wanted prisoners.

“Just to make sure that nobody’s life and personal security would be endangered, this morning I requested Secretary Año, I recommended to him that further law enforcement operations be suspended in the meantime,” Guevarra told ABS-CBN News Channel on Friday morning.

“We find it prudent to pause for a while, tally the count and make sure those who surrendered are those on the list,” he also said. “We want to make sure that those remaining [in the list] are actually people that need to be arrested.”

“Pending that verification then we deem it safe and prudent not to pursue any coercive law enforcement action at this time because we may unduly and unnecessarily endanger the life of not only the PDL (person deprived of liberty) but even the law enforcement agents.”

At Malacañang, Cabinet Secretary Karlo Nograles told reporters on Friday: “They are finalizing the list of those who are disqualified [from] the GCTA (good conduct time allowance). Meaning to say, more importantly, the heinous crime convicts. So they are finalizing the list so that the Philippine National Police can effect the warrantless arrests with pinpoint accuracy against those who were improperly freed due to the GCTA.”

“We will leave it just to the DOJ how fast they can screen and finalize the list. Hopefully, by next week, it will be clear who must be arrested by the PNP,” Nograles also said.

He added: “I am under the impression that they just want to be very sure about it. They are really making sure, so maybe they are just going over the list again and again, making sure that they didn’t miss out on anyone, and they did not include anyone in the final list who shouldn’t be there.”

As of 5 a.m. of Friday, 2,009 ex-convicts had surrendered, exceeding the 1,914 ex-convicts in the list submitted by the Bureau of Corrections (BuCor) to the DOJ.

BuCor has taken custody of 1,773 surrenderers, while 236 remained with the Philippine National Police, according to the DOJ.

In his news conference on Friday afternoon, Justice Undersecretary Markk Perete affirmed that some of the surrenderers were not even on the list of prematurely released convicts, while others were not even convicted of heinous crimes.

“If it is found out that they should be excluded from rearrest, they will be released immediately,” Perete said.

“We want to expedite the process so that they can be released immediately. I could not give particular timelines. We do understand it would be unfair for them to be detained one day longer. But understand that this is an operational problem that we encounter as well,” he added.

Año, in his statement on Friday, said that “as soon as we receive that list of unaccounted individuals today, we shall begin the manhunt to bring them to justice for evading the full service of their sentences.”

He, however, did not say whether the PNP will carry out the President’s order to capture the freed convicts “dead or alive.”

Meanwhile, police arrested early on Friday four men who were convicted of rape.

Around 3 a.m. in Makati City, police arrested Ernesto Zaldivar, 64, in his home in South Cembo. Around the same time, Manila police came for Rolando Cano, 46, and Jose Lozada, 72, both in Tondo. Last to be arrested was Cezar Pingco, 40, in Muntinlupa City.

Police were also looking for convicted murderer Rolito Go, although he had been ordered released by the Supreme Court in 2016 after he had served his sentence.

Guevarra said even if he was in the list, Go should not be rearrested since he was not released under the GCTA law.

Still on the GCTA, Sen. Leila de Lima maintained that the original implementing rules and regulations (IRR) of Republic Act No. 10592, or the expanded GCTA law, is consistent with the law itself.

De Lima, who as then justice secretary crafted the original IRR with ex-Interior Secretary Mar Roxas, said the first IRR did not indicate the exclusion of heinous crime convicts because the law itself “did not disqualify them from earning time allowances based on good conduct to begin with.”

“There is no irregularity or incorrectness in the original IRR of the GCTA law, which was issued as an institutional output of the DOJ and the Department of the Interior and Local Government (DILG) during the Aquino administration,” she said in a statement.

She made the remarks days after the DOJ and the DILG completed the revised IRR of the law.

“I hope the administration will stop looking for scapegoats to recover from the GCTA mess and instead hold the greedy and corrupt Bureau of Corrections and prison officers and personnel accountable for shortening the prison term of totally and notoriously undeserving inmates,” De Lima said. —WITH REPORTS FROM MELVIN GASCON AND KRIXIA SUBINGSUBING