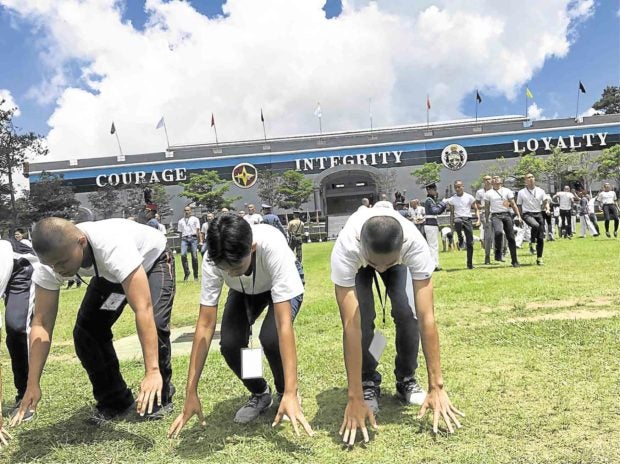 PLEBEIAN WELCOME Members of the Philippine Military Academy Class of 2023 are welcomed by their upperclassmen after setting foot in the academy in June. Slain cadet Darwin Dormitorio was among this group. —Vincent Cabreza

Lt. Gen. Ronnie Evangelista, the PMA superintendent, confirmed that the autopsy of fourth-class cadet Darwin Dormitorio showed that he died of hazing, the first such case in the academy in 18 years.

The 20-year-old Dormitorio, one of the 390 members of the Class of 2023 who were incorporated into the corps of cadets in July, is a son of retired Col. William Dormitorio, a member of the PMA Marangal Class of 1974.

Evangelista said three other cadets and three nonfaculty employees were considered persons of interest as the military and police continued a joint investigation.

The PMA superintendent said one first-class and two third-class cadets were confined at PMA detention facilities while all cadets living in the building where Dormitorio was found were also confined to barracks.

Twenty cadets are being interviewed to seek out witnesses, direct participants in Dormitorio’s beating and other possible victims, said Brig. Gen. Bartolome Bacarro, commandant of cadets.

The investigation also includes three nonfaculty academy employees, including two of Dormitorio’s training officers and one of the academy’s doctors.

Neither the PMA nor the Baguio City police identified any of the suspects, purportedly in deference to Dormitorio’s family.

In hospital for 2 weeks

A source in the academy, however, said Dormitorio had already been admitted to the PMA Hospital two weeks ago after complaining of stomach ailments.

He again complained of a stomach ailment and was admitted to the hospital from 8 a.m. to 5 p.m. of Tuesday but was later discharged after he was diagnosed with urinary tract infection.

Evangelista said Dormitorio “was excused from formation, athletics and drills” and was classified as “sick in quarters” but he again started vomiting at 8 p.m. of Sept. 17 and 1 a.m. of Sept. 18.

But his tactical officer and his squad leader, who lived with Dormitorio at PMA’s Mayo Hall Annex, did not return him to the hospital until 4 a.m. of Sept. 18. He died an hour later.

Evangelista said investigators were trying to establish why he was not returned to the hospital earlier and why the doctor who admitted him did not report the bruises found in the autopsy.

“Had he been given treatment earlier his life could have been saved,” Evangelista said.

Maltreatment in hazing or initiations rites have been prohibited since the enactment of Republic Act No. 8049, or the Anti-Hazing Act of 1995, which was later criticized after only one conviction was secured over 23 years.

That law was replaced in June 2018 when President Duterte signed Republic Act No. 11053, or the Anti-Hazing Act of 2018, which imposes harsher penalties on hazing death and penalizes individuals who attempt to cover up hazing activities.

The PMA superintendent said the PMA had established protocols, involving cadets themselves, relating to maltreatment since 1997.

The PMA Corps of Cadets on Friday issued a manifesto condemning maltreatment “as an insult to the sanctity of humanity and as an untoward act that destroys the core values that bind us together as brothers and sisters.”

“In a community of leadership, discipline, trust and fellowship, the Cadet Corps Armed Forces of the Philippines … [are resolved] to put an end to such excruciating acts that defy the very values that the [PMA] instills and we stand as one corps against maltreatment,” states the manifesto read by Cadet First Class Ram Michael Navarro, the cadet baron, or brigade commander.

The most recent hazing case led to the conviction in 2001 of two former third-class cadets—Michael Perang and John Louie Ong—for the death that year of Edward Domingo, a fourth-class cadet who was beaten with a lead pipe during a hazing ritual.

The incident took place years after the “no-to-maltreatment” campaign initiated in 1997 by the academy’s former superintendent, Victor Mayo.

After 2011, the PMA underwent a curriculum overhaul that included regulations in the manner senior cadets should treat lower class cadets as they follow the chain of command.

Evangelista said he was reviewing the procedures, intending to give senior cadets more responsibility for quelling maltreatment through what he called a “cadet first class policy board that is empowered to administer disciplinary actions against erring cadets.”

A wake has been arranged for Dormitorio at the academy’s Evangelical Church, away from prying eyes at the family’s request. —WITH REPORTS FROM MELVIN GASCON AND JULIE AURELIO