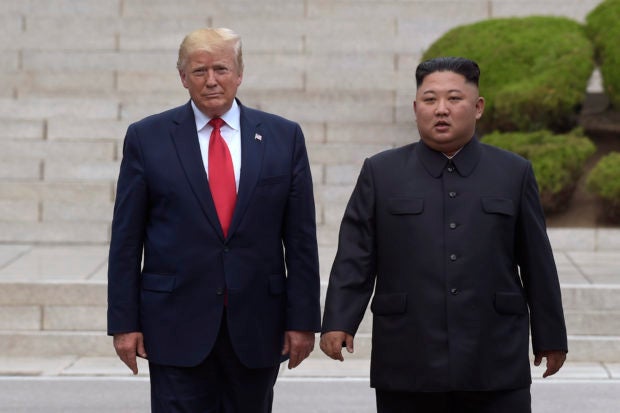 Those talks have been stalled for months by disagreements over trade-offs between sanctions relief and disarmament steps.

In a statement released by state media, North Korean diplomat Kim Myong Gil, who will be leading planned working-level talks with Washington, also praised Trump’s decision to fire his hawkish former National Security Adviser John Bolton, who advocated the “Libya model” of unilateral denuclearization as a template for North Korea.

Kim said he is optimistic about negotiations with the United States, which the North earlier said could resume in a few weeks.

Pyongyang has repeatedly demanded that Washington reconsider its stance following the collapse of a February summit between North Korean leader Kim Jong Un and Trump.

“(I) would like to welcome the wise political decision of President Trump to approach the DPRK-U.S. relations from a more practical point of view now that a nasty trouble-maker who used to face everything out of his anachronistic way of thinking has disappeared from the U.S. administration,” said Kim, the diplomat, referring to North Korea by its formal name, the Democratic People’s Republic of Korea.

Bolton, who North Korea previously described as a “warmonger” and “defective human product,” had insisted that the North should follow the Libyan path of denuclearization by fully eliminating its nuclear program upfront in a possible deal with the United States.

The 2004 disarmament of Libya is seen by Pyongyang as a deeply provocative comparison because Libyan autocrat Moammar Gadhafi was killed following U.S.-supported military action in his country seven years after giving up a rudimentary nuclear program that was far less advanced than North Korea’s.

Trump on Wednesday said Bolton’s comments set the United States back “very badly” in talks with the North. He said, “maybe a new method would be very good.”

Kim said he wasn’t exactly sure what Trump meant by a “new method” but assumed that he was implying a “step-by-step solution starting with the things feasible first while building trust in each other would be the best option.”

Nuclear negotiations have stalled for months following the February summit between Kim and Trump in Vietnam, which broke down after the U.S. side rejected North Korean demands for broad sanctions relief in exchange for a piecemeal deal toward partially surrendering its nuclear capabilities.

The North has demonstrated its displeasure with belligerent rhetoric and a slew of short-range weapons tests that were seen as an attempt to gain leverage ahead of negotiations.

While the timing of Bolton’s firing could be convenient for talks, experts say the departure of one adviser wouldn’t dramatically alter U.S. policy. The Trump administration has said sanctions and pressure will be maintained until North Korea takes concrete steps toward fully relinquishing its nuclear program. /kga