Surigao lumad wants Army out of their community 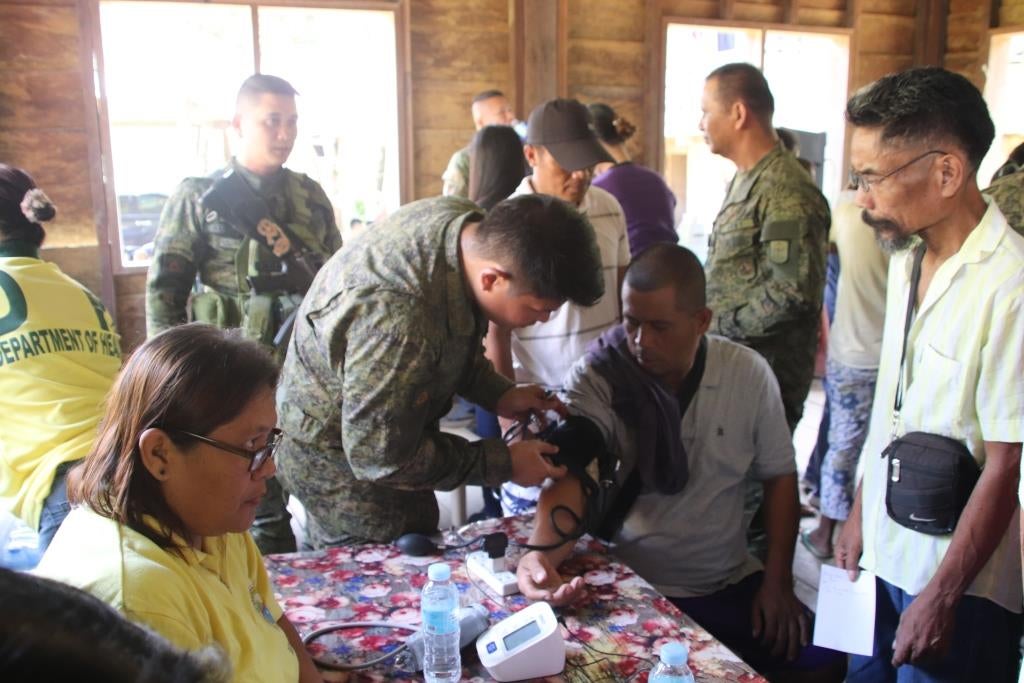 A government soldier checking the blood pressure of a resident of Diatagon, Lianga, Surigao del Sur during their medical mission. (Contributed photo)

LIANGA, Surigao del Sur –– Indigenous peoples here have asked Gov. Alexander Pimentel to facilitate the pullout of Army troops from their hinterland community of Diatagon in keeping with a 2018 agreement.

In a statement, the lumad group Malahutayong Pakigbisog Alang sa Sumusunod (Mapasu) said the presence of about 60 soldiers in the village, particularly in Km. 9, since August 16 had the people feeling uneasy.

Mapasu pointed to a July 30, 2018 agreement signed by provincial and local officials, lumad leaders, priests, nuns, pastors, and military officials in which the Army promised to no longer set up detachments within the neighboring lumad communities.

It also stipulated that soldiers are not allowed to live in civilian homes and community centers.

The agreement was reached to appease hundreds of lumad evacuees who were poised, at that time, to stage a long walk towards the Provincial Sports Complex in Tandag City because of the increased presence of military troops in their communities.

Mapasu noted that farm productivity since 2016, when the community was relatively peaceful, have increased, a development that they don’t want to be disturbed with the heavy presence of soldiers.

In a dialogue last week, Pimentel told some 100 lumad leaders that he could not interfere with their request to prohibit the presence of Army soldiers from their communities since Mindanao is still under martial law.

He also reasoned that he could not stand in the way of the implementation of President Duterte’s Executive Order No. 70 which sets the framework for ending the local communist insurgency.

Lt. Krisjuper Andreo Punsalan, civil-military officer of the 3rd Special Forces Battalion, said Km. 9 is one of the most affected by activities of the New People’s Army.

Punsalan said the rebels are using the lumad as human shields to evade government forces through staged evacuations.

He said the supposed modus was revealed to them by a Km. 9 resident.

The lumad in Km. 9 have been evacuating from their community since 2011.  /lzb