Even acquitted, paroled and pardoned inmates included in GCTA list 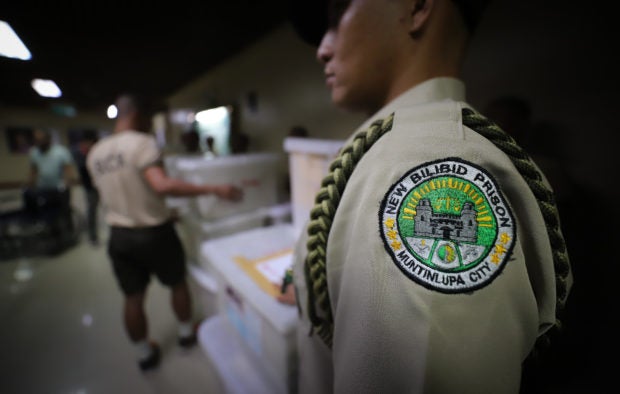 Bureau of Corrections (BuCor) personnel keep tight watch round-the- clock on the more than one million documents of 46,000 plus convicts released since 2010 now in the custody of the Senate recently. PRIB FILE PHOTO

MANILA, Philippines–Following the current list that the Bureau of Corrections (BuCor) has provided the Senate, Department of Justice (DOJ), Department of the Interior and Local Government (DILG) and Philippine National Police (PNP), the Aquino administration has released a total of 445 convicts from 2014, or when the Expanded Good Conduct Time Allowance (GCTA) became a law, while the Duterte administration has released a total of 1,914 convicts.

Of the 1,914 convicts, 200 were released by the BuCor after the Supreme Court ruled that the implementation of the Expanded GCTA Law should be retroactive, but of the 200, 36 were released not because of GCTA but because they were granted parole.

The same list showed that not all of the 1,714 convicts or Persons Deprived of Liberty (PDLs) released under the Duterte administration prior to June 2019, were released not because of GCTA. A total of 192 PDLs were released through the grant of parole, 74 were acquitted, one was released on habeas corpus and 12 were granted conditional pardon. All these convicts were required to surrender.

A total of 10 of those given conditional pardon by the President was convicted of murder while four were convicted of kidnapping.

On the other hand, of the 445 PDLs released, based on the same list by the BuCor, 43 were released after they were granted parole while 64 were acquitted.

The deadline for all the released PDLs to surrender ended at 11:59 p.m. Thursday but the DOJ has called on the police to suspend the rearrest pending the release of a “cleaned up list” from the BuCor. The government is requiring only the surrender of those who benefitted from the GCTA.

As of 11 p.m. Thursday, the DOJ said a total of 1,717 PDLs have surrendered and turned over to the BuCor. However, no information was disclosed if all the 1,717 PDLs are on the list given that the PNP’s record showed that as of Wednesday, there are 391 surrenderers who are not in the BuCor’s list.

The PNP has already prepared tracker teams for the rearrest of those who failed to comply with the President’s order. /jpv

RELATED STORY: 356 of 487 convicts who surrendered not in BuCor list given to Senate