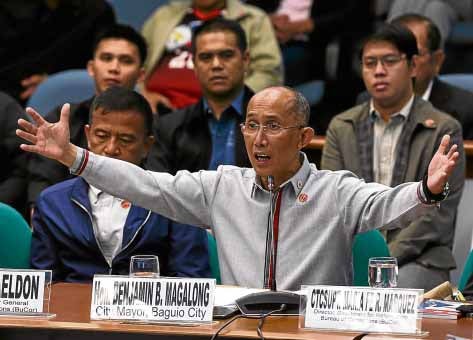 When it comes to control of the illegal drug trade in the country, all roads lead to New Bilibid Prison, a former Philippine National Police chief of criminal investigation told the Senate on Thursday.

Benjamin Magalong, a former chief of the Criminal Investigation and Detection Group, told the Senate inquiry into irregularities in the Bureau of Corrections (BuCor) that corrupt policemen who recycle seized drugs, a racket known as “agaw bato,” do business with convicted drug lords detained in New Bilibid Prison.

Magalong testified in the inquiry led by Sen. Richard Gordon as a resource person. He served as CIDG chief from 2013 to 2015, and is now mayor of Baguio City.

“As a result of the intelligence operations and operational research we conducted, it was revealed that [policemen] involved in the agaw bato scheme deal and transact with inmates inside [Bilibid],” Magalong said.

“In our investigation, it appears that all roads practically lead to [Bilibid]. And we found out [that] despite being detained [in Bilibid], these Chinese drug [convicts] continue to remotely manage the drug trade in the entire country,” he added.

Magalong, however, said it was not true that there was a drug lab inside the national penitentiary in Muntinlupa City.

The drug lords do not need a laboratory in Bilibid because it is easier to manage a laboratory outside the prison, he said.

In his testimony, Magalong said he learned about agaw bato  after being appointed to head the CIDG.

They would also release arrested drug syndicate members, charging as much as P50 million, and would then arrest other people as fall guys, he said.

He said the rogue cops would advise their superior officer about an impending operation to get a high-profile target and tell him to to sit tight in his office.

The team would then begin the operation.

After they catch the target and seize his drugs, they would proceed to their own safe house, Magalong said.

If they are detected by other  law enforcers along the way, they would tell them that their operation has clearance from their boss and they could call the office to check, he said.

If not detected, they have options, he said.

They would then put the drug on the market, which push down street prices of substance, Magalong said.

Magalong said he believed the racket was still alive, though it could have been “tempered.”

Earlier this week, Philippine Drug Enforcement Agency chief Aaron Aquino told a Senate hearing on his agency’s budget for 2020 that rogue law enforcers, including officers from his group, were recycling seized drugs.

The information prompted several senators to call into question the success of President Duterte’s war on drugs.

On Thursday, Magalong told the senators that some of those involved in the racket are already ranking officers.

He asked for an executive session to name them.

After the hearing, Gordon  said Magalong named a retired police official and another who was still active.

Gordon said he would relay the information to the President.

He said he was surprised when he heard the names.

Also during the hearing, Magalong narrated meetings he had with Sen. Leila de Lima in 2014, when she was still justice secretary, and several other officials to plan a drug raid on Bilibid.

He said he had offered De Lima a more comprehensive information about the drug business in the state penitentiary.

But after several meetings, he learned that the raid had already been carried out.

Magalong said that to this day, it remained a mystery to him why he was excluded.

He also said he wondered why the raid was carried out in December when the last planning session was in July.