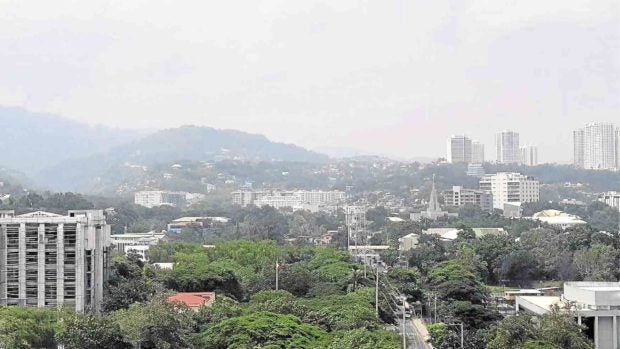 SOUTHERN HAZE Traces of haze from the Indonesian forest fires have been detected in several areas in Mindanao and the Visayas. In Cebu, the view of the city’s skyline is obscured by smog. —DALE ISRAEL

Tests done by environment agencies have indicated that traces of haze coming from forest fires in Indonesia have reached several areas in the Visayas and Mindanao.

In Cebu City, an advisory from the Environmental Management Bureau (EMB) in Central Visayas said Metro Cebu was experiencing haze, citing satellite image. Haze is an atmospheric phenomenon when dust, smoke and other dry particles obscure the clarity of the sky.

“We are looking into the ongoing forest fires in Indonesia as the source of the haze affecting Metro Cebu and other parts of the Visayas,” said Cindy Pepito-Ochea of the EMB Central Visayas.

According to the EMB, this increases the chances of humans and animals absorbing them through their bodies, “and might bypass the nose and throat and penetrate deep into the lungs. Some may even enter the circulatory system.”

The EMB asked the public to take safety measures and wear personal protective equipment, such as dust masks or goggles, to protect themselves from pollutants.

“If you have nothing to do outside, stay indoors and always keep your windows and doors closed. Do not jog or run outside as the body ingests more pollutants when active,” its advisory added.

The haze was also observed in several cities across the Visayas including Iloilo, Silay, Dumaguete, Bohol and Cebu.

In Bohol, residents along the coastal communities of Tagbilaran facing Maribojoc town have noticed manifestations of haze over the weekend.

In Northern Mindanao, Florencio Dominguez Jr., head of the DENR’s Environmental Monitoring and Enforcement in the region, said the agency’s air quality monitoring equipment detected the increase of particles in Cagayan de Oro City’s ambient air over the weekend.

Dominguez said the haze would be pronounced in Western Mindanao because of the prevailing southwest winds that blow through Central Visayas.

In General Santos City, the EMB in Soccsksargen region, had advised the public to brace for possible smog or high-level air pollution in southern Mindanao because of the forest fires raging in Sumatra and Borneo.

“As a word of precaution, those with allergies, asthma and other respiratory illnesses should confine themselves indoors to avoid inhaling pollutants brought by the haze,” said Alex Jimenez of the regional EMB.

The EMB had set up monitoring stations last week in the cities of General Santos and Koronadal, and in Tupi, South Cotabato.

Based on its latest advisory, the EMB said the air quality level in these areas were still within the “good to fair condition and does not threaten human health yet.”

But it advised children, elderly, pregnant women and those with heart and lung conditions to reduce outdoor activities.

In Davao City, the EMB assured that the air quality in the city remains within the good to fair level although it advised people with respiratory problems to take precautionary measures. —REPORTS FROM DALE ISRAEL, LEO UDTOHAN AND CARLA GOMEZ IN THE VISAYAS; AND BONG SARMIENTO, FROILAN GALLARDO AND JULIANNE SUAREZ IN MINDANAO