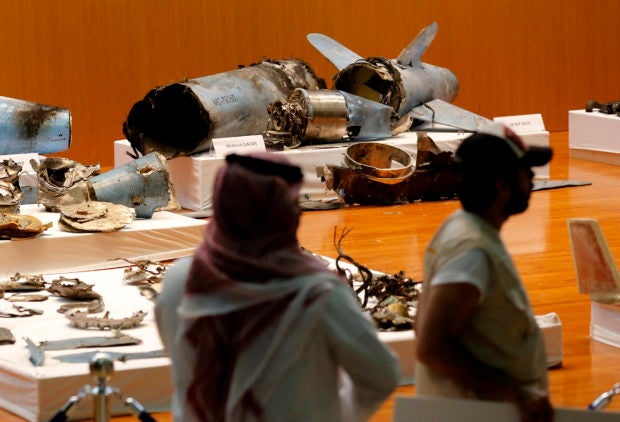 The Saudi military displays what they say are an Iranian cruise missile and drones used in the recent attack on its oil industry at Saudi Aramco’s facilities in Abqaiq and Khurais, during a press conference in Riyadh, Saudi Arabia, Wednesday, Sept. 18, 2019. (AP Photo/Amr Nabil)

DUBAI — Iraq’s Foreign Ministry spokesman has said it will not join a U.S.-led coalition to protect waterways across the Mideast after an attack on Saudi oil installations.

Ahmad al-Sahhaf said Gulf security is the responsibility of Gulf countries. In a statement Thursday, he said Iraq rejects Israel’s participation in the coalition.

The U.S. formed the coalition after attacks on oil tankers that American officials blame on Iran, as well as Iran’s seizure of tankers in the region. Israeli media quoted an Israeli official in August saying the country had joined the coalition, but the only publicly pledged countries recognized by the U.S. are Australia, Bahrain, Saudi Arabia, the U.K., and the United Arab Emirates.

Iraq, which is allied with both Iran and the U.S., has tried to keep a neutral stance amid the tensions.

Meanwhile, Iranian Foreign Minister Mohammad Javad Zarif has warned that any U.S. or Saudi military strike on Iran will result in “all-out war.”

Zarif made the comment in an interview published by CNN Thursday.

It comes after U.S. Secretary of State Mike Pompeo called an attack on Saudi oil installations an “act of war.”

The U.S. accuses Iran of being behind the attack. Iran denies that.

Yemen’s Iranian-backed Houthi rebels have claimed the attack, saying it is over the years-long Saudi-led war there that’s killed tens of thousands of people. However, experts told The Associated Press the cruise missiles used in the assault did not have the range to have been launched from Yemen and reach their targets. /kga