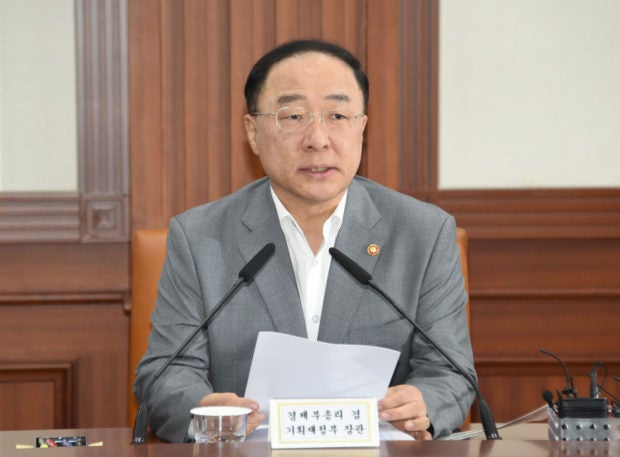 SEOUL — South Korea’s fiscal chief on Wednesday announced proposals to improve the supply of key workforce amid a declining population and aging society.

The government’s latest blueprint announced Wednesday focuses on recruiting teachers, soldiers and foreign workers in nonmetropolitan areas, as well as improving the employment conditions for seniors.

Earlier this year, a report by the Organization for Economic Cooperation and Development showed that Korea’s fertility rate dipped to a record low of 0.98 last year.

It was the only OECD member state to see its birthrate index sink below one — the minimum figure required to maintain the population at its current size is 2.1, according to data.

Citing the country’s fast aging population, he unveiled a set of employment subsidies for the employment of seniors seeking jobs. He also vowed to introduce smart systems at production sites for the elderly and nurture related industries.

“We will raise the employment subsidy for workers aged 60 or more to 300,000 won ($252) from 270,000 won per quarter and introduce incentives for employers who voluntarily reemploy senior citizens past their retirement age,” Hong said.

“The mid- and long-term target is to improve the employment situation for the youth and establish a sustainable job market for elderly people.”

He also vowed to simplify the reentry process and alleviate visa restrictions for legitimate foreign workers.

One of the plans under review is the introduction of an incentive system, allowing long-term residence to qualified foreign national workers. Candidates will be selected upon the recommendation of technical colleges and manufacturing industries in underpopulated areas.

“(Qualifying foreign workers) may be subject to extra benefits when applying for a permanent residency review,” the ministry said in its release.

Work visa-holding foreign workers in agricultural, livestock and fisheries, or those working in small-sized enterprises with less than 50 employees, currently have to return to their home country for three months, before reapplying for entry. The government is now working on reducing the three-month waiting period and plans to expand the range of beneficiaries, ministry officials said.