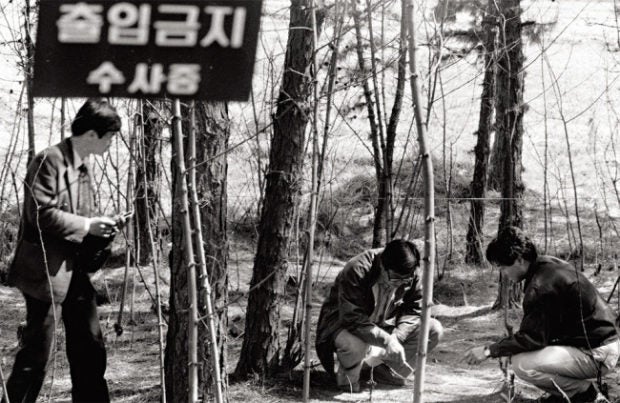 Police authorities investigate one of the crime scenes of the Hwaseong serial killings in the 1980s. The Korea Herald/Asia News Network

SEOUL — After decades of futile searching, investigators have made belated progress in the “Hwaseong murders” — a series of rapes and murders that shocked South Korea in the 1980s.

Officials of the Gyeonggi Nambu Provincial Police Agency said Wednesday that they had narrowed down the prime suspect to a man in his 50s who is currently serving a prison sentence for another rape and murder.

“In July this year, we sent part of the evidence to the National Forensic Service, which result showed that the DNA of the suspect matches at least two of the 10 cases,” officials said.

Following these updates, the agency kicked off a new investigation team and sent the rest of the related evidence to the NFS for further testing.

The unsolved murders took place between 1986 and 1991 and involve the serial killings of 10 women of various ages in Hwaseong, Gyeonggi Province, which was a sparsely populated rural area at the time. Victims were mostly found in dimly lit alleys or paddy fields, and were thought to have been attacked on their way home.

The film “Memories of murder,” directed by Bong Joon-ho and starring actor Song Kang-ho, was based on the true story of this unsolved crime.

According to the Criminal Procedure Code at the time of the crime, the statute of limitations for the last of the serial killings ran out in 2006. The police prolonged the investigation throughout the years, seeking to put an end to one of the most dishonorable cold cases in in crime history, but to no avail.