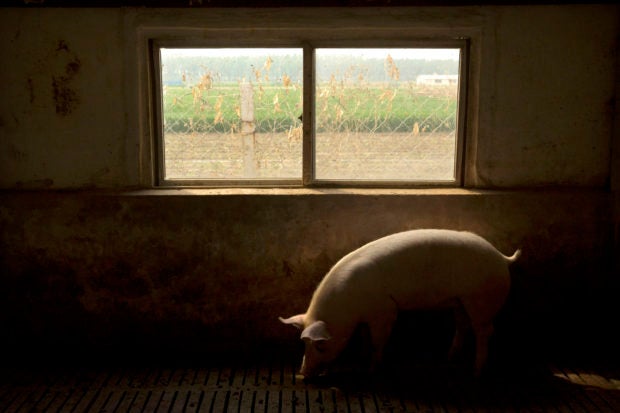 In this May 8, 2019, photo, a pig walks near a window in a barn at a pig farm in Jiangjiaqiao village in northern China’s Hebei province. Pork lovers worldwide are wincing at prices that have jumped by up to 40 percent as China’s struggle to stamp out African swine fever in its vast pig herds sends shockwaves through global meat markets. (AP Photo/Mark Schiefelbein)

BEIJING — China will auction 10,000 tons of reserve pork this week, the commerce ministry said, in a bid to control the fallout from an outbreak of African swine fever that has sent prices soaring and hit supplies of the meat ahead of a key holiday.

Beijing has been struggling to control the disease, which has ripped through its massive pig-farming industry, leading to the culling of more than a million of the animals.

In a statement published on its website Tuesday night, a state-owned company that handles the reserves said it would auction off imported frozen pork from countries including Denmark, Germany, France, the United States, and Britain.

Only 300 tons will be sold to each bidder at the auction.

The decision comes ahead of a week-long national holiday and celebrations for the 70th anniversary of the founding of the People’s Republic of China on October 1.

Authorities are scrambling to contain the outbreak of African swine fever as the costs of the country’s staple meat soar.

The number of pigs culled as a result of the outbreak is widely believed to be much higher than the 1.1 million officially reported, with government data showing China’s pig herd totaled 347.6 million in the first half of the year, down 60 million from the same period last year.

Last week Beijing also said it would exempt high-profile US agricultural products including pork from added tariffs in its long-running trade war with Washington. /kga