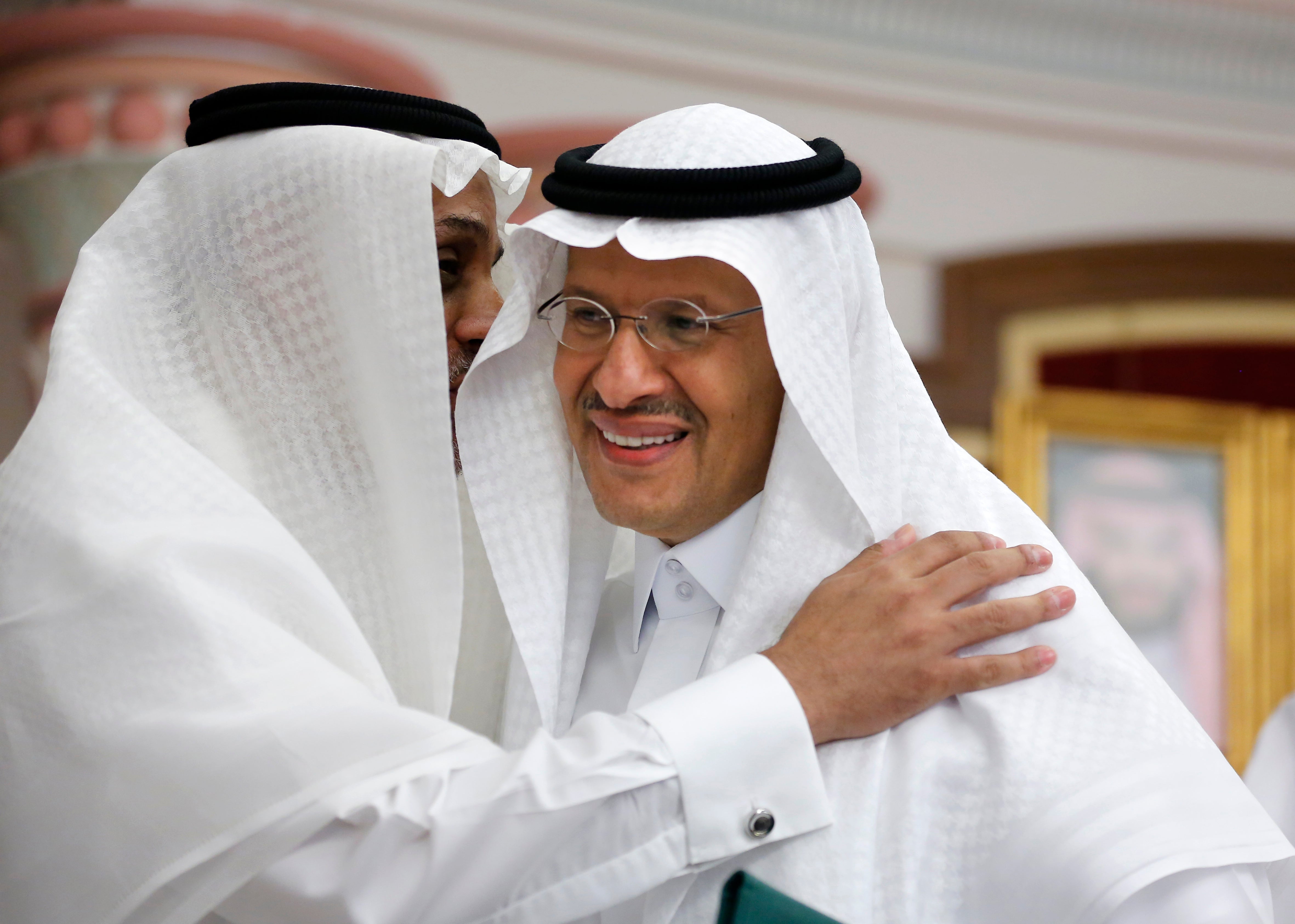 Energy Minister Prince Abdulaziz bin Salman smiles as he is congratulated after a press conference in Jiddah, Saudi Arabia, Tuesday, Sept. 17, 2019. Saudi Arabia’s energy minister said Tuesday that 50% of its daily crude oil production that was knocked out by a weekend attack had been restored and that full production is expected by the end of the month.(AP Photo/Amr Nabil)

DUBAI, United Arab Emirates  — Saudi Arabia said Wednesday it joined a U.S.-led coalition to secure the Mideast’s waterways amid threats from Iran after an attack targeting its crucial oil industry.

The kingdom’s decision to enter the International Maritime Security Construct came ahead of a planned visit by U.S. Secretary of State Mike Pompeo. Saudi officials separately planned to share information about the weapons used to attack a Saudi oil field and the world’s largest crude oil processing plant Saturday.

Yemen’s Iranian-backed Houthi rebels have claimed the attack, but the U.S. and Saudi Arabia say they suspect Iran carried out the assault. Iran denies that, though it comes amid a summer of heightened tensions between Tehran and Washington over its unraveling nuclear deal with world powers.

Australia, Bahrain and the United Kingdom already have joined the mission.

“The kingdom’s accession to this international alliance comes in support of regional and international efforts to deter and counter threats to maritime navigation and global trade in order to ensure global energy security and the continued flow of energy supplies to the global economy and contribute to maintain the international peace and security,” the news agency said.

U.S. military officials did not immediately respond to requests for comment from The Associated Press.

The coalition aims to secure the broader Persian Gulf region. It includes surveillance of the Strait of Hormuz, the narrow mouth of the Persian Gulf through which a fifth of the world’s oil travels, and the Bab el-Mandeb, another narrow strait that connects the Red Sea and the Gulf of Aden off Yemen and East Africa. Smaller patrol boats and other craft will be available for rapid response. The plan also allows for nations to escort their own ships through the region

The U.S. Navy already has sent Arleigh Burke-class guided missile destroyers to chokepoint positions, like either end of the Strait of Hormuz. There, they observe ship traffic and monitor for anything unusual as drones and other aircraft fly surveillance routes overhead.

The U.S. blames Iran for the apparent limpet mine explosions on four vessels in May and

another two in June sailing in the Gulf of Oman near the Strait of Hormuz, something Iran denies being behind. Iran also seized a British-flagged oil tanker and another based in the United Arab Emirates.

It’s unclear what role the kingdom will play in the coalition. Bahrain already serves at the headquarters of the U.S. Navy’s 5th Fleet.

Wednesday’s announcement comes after Saudi Arabia’s energy minister said late Tuesday that more than half of the country’s daily crude oil production that was knocked out by an attack had been recovered and that production capacity at its targeted plants would be fully restored by the end of the month.

“Where would you find a company in this whole world that went through such a devastating attack and came out like a phoenix?” Prince Abdulaziz bin Salman said about state-owned Saudi Aramco, which was the target of the attacks. His question to reporters, many of them Saudi, drew applause. /muf