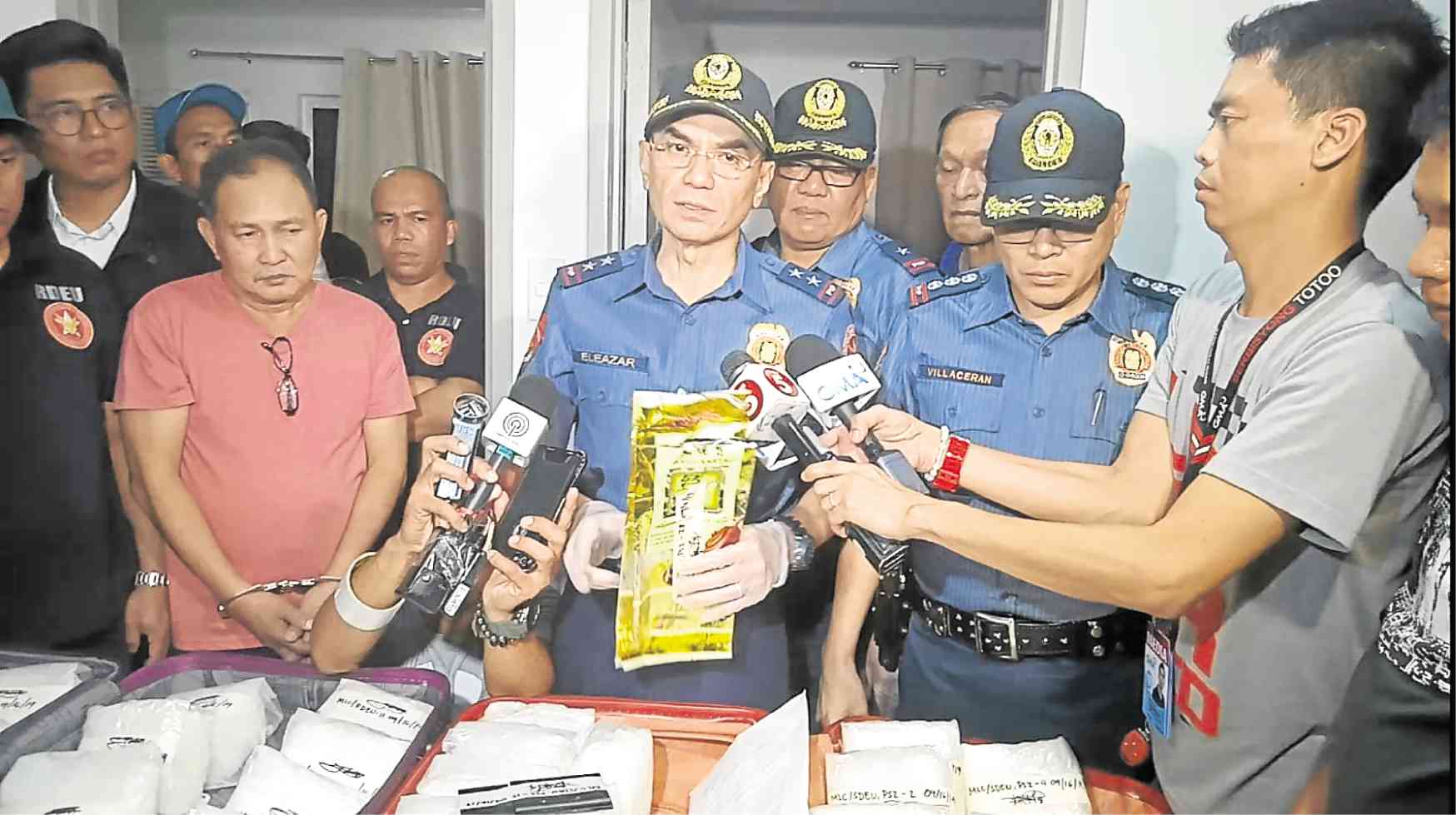 HIGH VALUE It’s end of the road for Manolito Carlos (in handcuffs), who allegedly delivered “shabu” by car to drug dealers from his condominium unit in Pasig City. —PHOTO COURTESY OF NCRPO

MANILA, Philippines — Metro Manila police on Monday night dealt a blow to drug syndicates after seizing some P200 million worth of “shabu” (crystal meth) from an alleged big-time dealer in his rented condominium unit in Pasig City.

He said that one Edgardo Alfonso, who was killed in a shootout with antidrug operatives in Quezon City last Sunday, worked for the same convict.

Carlos denied working for a drug syndicate and a convict inside the national penitentiary.

Agents from the NCRPO Regional Drug Enforcement Unit seized 30 kilos of shabu concealed in packs of tea during a raid on his unit at a condominium on C. Raymundo Avenue in Barangay Rosario at around 7:30 p.m. on Monday.

Police said Carlos stored drugs in his unit and delivered them by car to drug dealers. Carlos was arrested and charged in court for drug dealing in 2010, but was later cleared of the charges.

Carlos said he had been clean for years and had gotten involved in the drug trade for only a year, earning as much as P200,000 per deal.

“My family wanted me to stop, and I want to but I cannot. I’m afraid of my life, because they may get back at me because I already know too much,” he told reporters.

“Unless they can identify to us these said policemen with validated reports, the sweeping statement made by the PDEA Director is not necessarily true at face value,” he said in a statement. —With a report from Cathrine Gonzales

Read Next
Teachers confused by P110-B pay hike for state workers
EDITORS' PICK
Duterte approves Metro Manila’s shift to GCQ starting June 1
SM prepares for ‘safe malling’
2 Chinese nationals arrested in raid on another unlicensed COVID-19 hospital in Pampanga
Notice of 2020 regular meeting of stockholders June 18, 2020
Leveling up your ‘lutong bahay’ with the kitchen companion you never knew you needed
NBI, Immigration to join hunt for ‘underground’ medical clinics
MOST READ
Duterte approves Metro Manila’s shift to GCQ starting June 1
Revillame tells Roque: ABS-CBN is in my heart despite being in rival network
Duterte on Philippines’ COVID-19 figures: Not so bad
NCR is ready for GCQ — Palace
Don't miss out on the latest news and information.