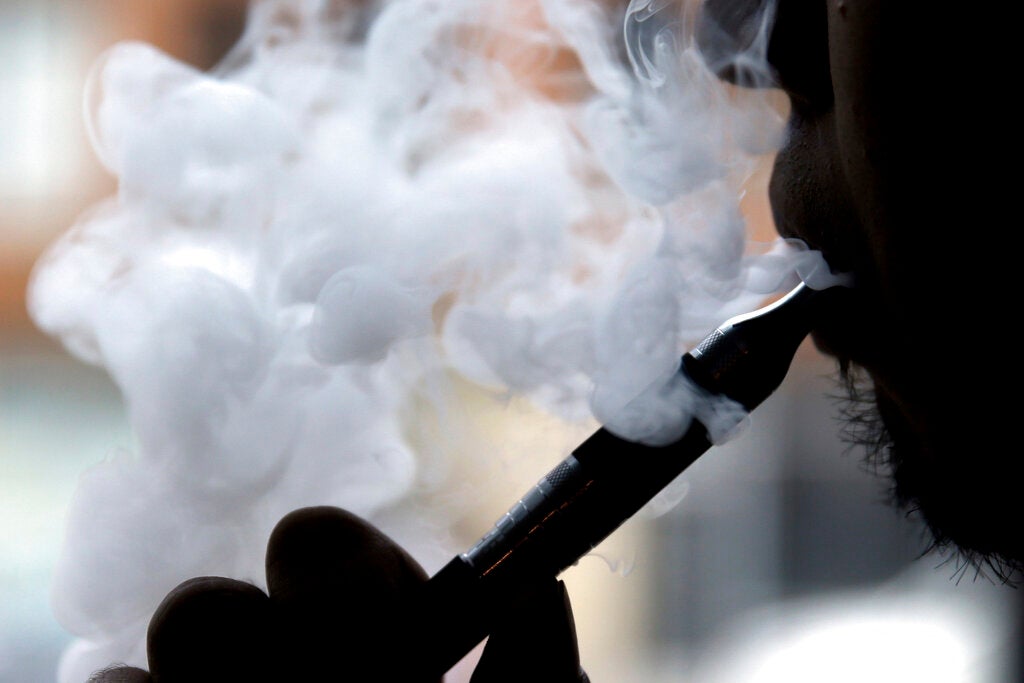 Cuomo, a Democrat, proposed the ban on Sunday. The emergency regulation will take effect immediately if approved as expected Tuesday by the state’s Public Health and Health Planning Council. Retailers will be given two weeks to remove merchandise from their shelves.

At the Jubilee Vape & Smoke Inc. shop in downtown Manhattan, manager Inam Rehman and coworkers spent Monday morning trying to parse the governor’s plans, holding off ordering more of the vaping products that make up over 35% of their business, and fielding questions from patrons.

“It’s all a big confusion,” Rehman said as he oversaw a store stocked with vaping devices and small bottles of oils in “Amazing Mango,” ”Hawaiian Pog,” ”Brain Freeze” and other flavors. “We don’t know: What do we to tell our customers?”

The new rules come as health officials investigate what might be causing hundreds of serious breathing illnesses in people who use e-cigarettes and other vaping devices. They have identified 380 confirmed and probable cases in 36 states and one territory, including six deaths.

Republican President Donald Trump has proposed a federal ban on flavored e-cigarettes and vaping products, but Cuomo said Monday the emergency regulations are warranted because the state can’t wait.

“Vaping we know is dangerous,” Cuomo said Monday on WNYC public radio. “At a minimum, it addicts young people to nicotine… I’ve grown tired and weary of waiting for the federal government to act responsibly, whether it’s on guns, on opioids or on the environment.”

On Monday shopkeeper Ashif Lakhani was minding the NYC Smoke Shop & Vape Shop, which now derives about 40% to 50% of its business from the sale of vaping products. He said he is convinced that the recent wave of vaping-related health problems stem from black-market products, not the ones on the shelves of the shop, which his brother owns.

He said he worries New York’s potential regulations will drive more vapers to the black market and/or online vendors — where he notes that merchants can’t see their customers while checking their ages.

“These kinds of stores, which do the age verification … should be given a fair chance, rather than this online stuff, which nobody knows who’s buying,” Lakhani said.

Most of the people who have fallen sick say they vaped products containing THC, the high-producing ingredient in marijuana. New York permits only medical marijuana use, with the drug sold at licensed dispensaries, not smoke shops. So far there have been no reports of adverse effects from the vaping devices used in the state’s medical pot program.

Rehman said he wasn’t entirely surprised that officials targeted vaping, but he thought there should be studies, public hearings and legislation.

“In a snap, this thing comes,” said Rehman, who feels that vapers aren’t being afforded enough input.

To him, the pros and cons of vaping depend on how it’s used. He said he struggled to quit smoking cigarettes until he switched to vaping. While he doesn’t argue that vaping is harmless, he said he considers it less harmful than smoking tobacco, the top cause of preventable death in the U.S.

“Excessive anything can get you sick,” he said. “If you do it responsibly, and it’s not sold to the minors, I think it is not that bad.”

The ban would not impact tobacco- and menthol-flavored e-cigarettes, a detail that was criticized by health groups who said they worry young vapers will simply switch varieties to avoid the restrictions. It will include all types of flavored vaping products — including disposable and refillable devices.

Other states are expected to consider their own restrictions on e-cigarettes. Earlier this month in Michigan, Gov. Gretchen Whitmer ordered that state’s health department to come out with emergency rules to prohibit flavored e-cigarette sales.