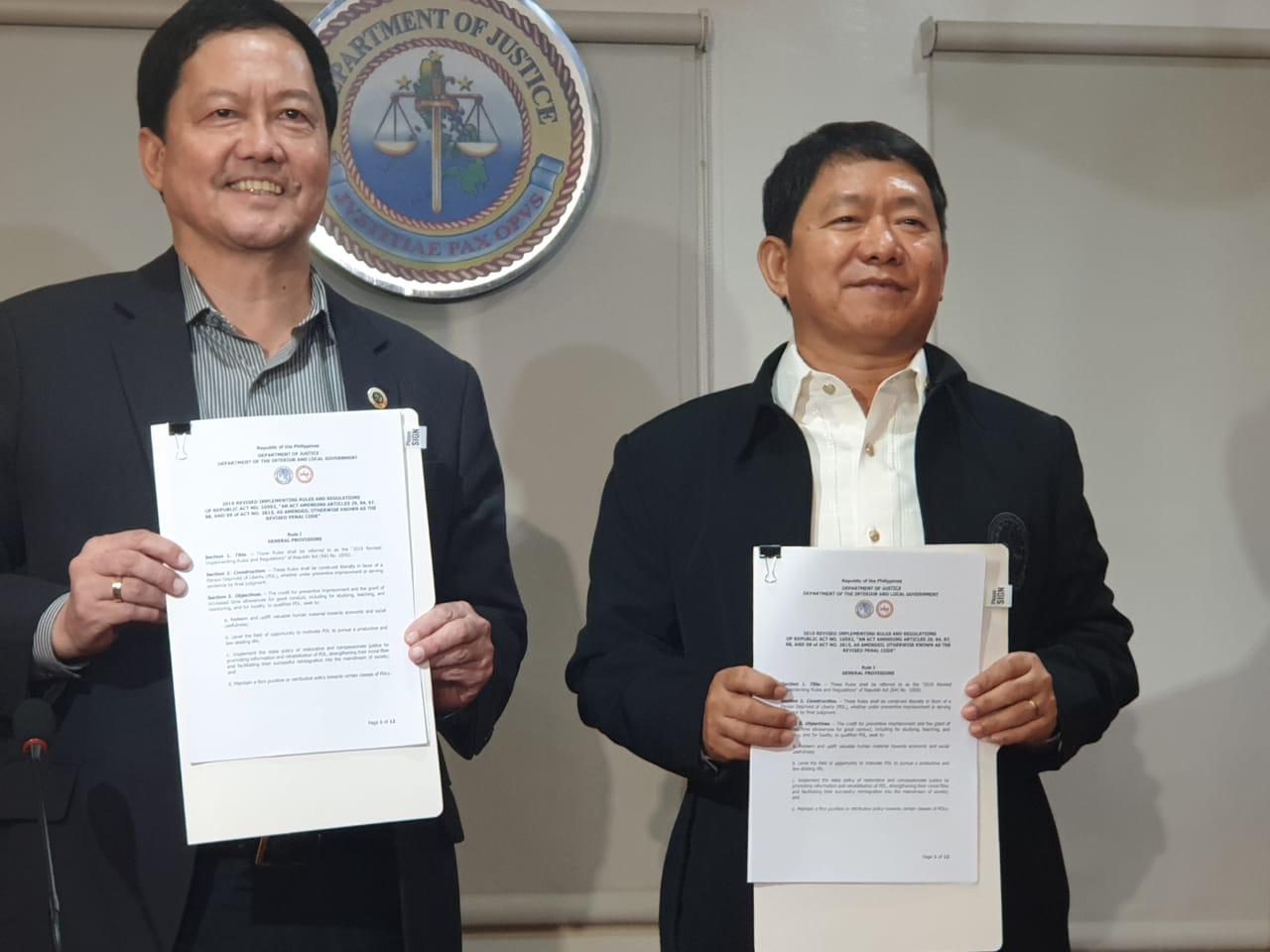 MANILA, Philippines — The Department of Justice (DOJ) and the Department of the Interior and Local Government (DILG) have completed and signed the revised Implementing Rules and Regulations (IRR) of the Republic Act 10592, or the law that increases the time slashed from the prison term of convicts due to good behavior.

Included in the revised IRR is a clarified provision stating “recidivists, habitual delinquents, escapists and those convicted of heinous crimes” are disqualified to benefit from the good conduct time allowance (GCTA).

Justice Secretary Menardo Guevarra explained that as a guide on what heinous crimes are, the revised IRR has adopted the definition of heinous crimes under Republic Act 7659 or the Death Penalty Law as well as Supreme Court jurisprudence.

Guevarra said a Management Screening and Evaluation Committee (MSEC) will look into the time credits and grant of time allowances to entitled persons deprived of liberties (PDLs). Aside from DOJ, Guevarra said accredited civil society organization will also be part of the deliberation.

And as part of transparency, Guevarra said the revised IRR included the publication of the names of PDLs that may be due for release because of GCTA on the website of concerned government agencies such as DOJ and the Bureau of Corrections (BuCor).

Meanwhile, the DOJ-DILG review committee will have 60 more days to complete their work on the Uniform Policy and Guidelines regarding computation of credits and allowances. This is the same committee that completed the revised IRR of RA 10592.

The creation of the joint committee stemmed after reports came out that former Calauan Mayor Antonio Sanchez – serving the penalty of nine counts of reclusion perpetua – was due for release on good conduct.

Last month’s news of Sanchez’s impending release resulted in public outrage that eventually spawned a Senate investigation on BuCor and New Bilibid Prison, and led to the cancellation of the rapist-murderer’s early freedom. /kga

Read Next
Inmates still at large told: You got 4 days to yield or face warrantless arrest
EDITORS' PICK
NCR’s COVID-9 alert level may be downgraded from 3 to 2 soon — DOH
Climate Change Commission and Nestlé PH to discover sustainability-focused solutions
Biden vows to stand with Asia on freedom, hits at China on Taiwan
FDA reviewing COVID-19 vaccines’ EUA for booster shots
What’s at stake for every fighter at ONE: NextGen
Legarda emphasizes role of ICC/IPs in nation building this IP month
MOST READ
Drivers now required to take driver’s education upon license renewal – LTO
Marcos Jr’s ‘special diploma’ from Oxford: You can have it, too
Gordon to Duterte: You? Teaching me courtesy?
PDP-Laban Cusi wing Senate bets willing to give way to Duterte
Don't miss out on the latest news and information.